Lend Me a Tenor is the Ritz Theatre’s penultimate offering of its 2015 season. A comedy written by Ken Ludwig, it premiered in 1986 at London’s West End theater and on Broadway in 1989, garnering nine Tony awards and winning two. It is set in 1930’s Cleveland, Ohio, and the Art Deco hotel suite set reflects that beautifully.

Lend me a Tenor is a comedy of errors, and reminiscent of the  screwball comedies of the ’30’s and ’40’s. A famous Italian tenor is coming to the Cleveland opera, celebrating it’s tenth anniversary, to sing Verdi’s “Otello”. When he arrives–late–all sorts of mishaps ensue, resulting in switched identities, and side-splitting double-entendres. 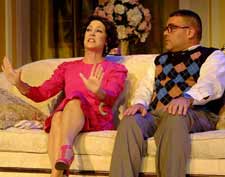 Their timing is flawless, their repartee a joy and a wonder to behold. Max and Tito are standouts when they perform their operatic tenor duet towards the end of Act I. Clearly director Al Fuchs knew what he was doing when he cast and directed this play.

If you like comedy, great comedy, then this is the play to see. It runs through October 4th. Tickets can be purchased by calling 856.858.5230, or online at www.ritztheatreco.org.

Cirque du Soleil – Toruk is over the top