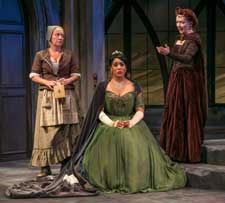 The Shakespeare Theatre of New Jersey’s season so far has been extraordinary. Last night’s opening of Exit the King, a masterpiece by absurdist playwright Eugene Ionesco, extends this winning streak. In the process, director Bonnie J. Monte and a superb cast of six reveal a work that casts a fresh and sometimes disturbing light on common human experiences and emotions, forcing the audience to reconsider the vast mysteries lying just under the façade of the commonplace.

At the root of this play is love – its meanings, its uses, and the motivations behind its actions. Queen Marguerite, first wife to the over 400-year-old King Berenger, and Queen Marie, Berenger’s second wife, are at odds over the best way to show love for the King. Is Marguerite honest in her statements, or is she

looking for revenge on the husband who withheld his love for her? Does Marie act from kindness or from a desire to continue living in a fantasy version of the old king’s court? What of the Doctor who is also the royal executioner – does he see the King as a patient or the subject of experimentation?  The sole remaining servant woman? The Guard who remembers shared victories with his old commander? And is Berenger’s love reserved for anyone other than himself?

The cast is uniformly excellent: Brent Harris’ portrayal of King Berenger, a joyful rascal as the play starts, growing more frantic as he finds his world literally fading away until at last he too disappears into the silent dark, gives a tour de force performance that will be long-remembered.

He is nimbly matched by Marion Adler’s Queen Marguerite, the last to leave him, insistent for the truth and for preparing the king for the inevitable. The Queen Marie of Jesmille Darbouze, in her second season at the Shakespeare Theatre, shows herself to be a young actress of promise and a fine addition to the company; some additional training on her chest voice could prove valuable in extending her versatility.

Jon Barker, Kristie Dale Sanders, and Greg Watanabe, as the Guard, Juliette the servant, and the Doctor, respectively, lend deft comic performances at the start of the play that blend seamlessly into strong dramatic performances that made me sad to see them make their final exits.

Director Monte, who is also the Artistic Director of the Shakespeare Theatre, has created an outstanding ensemble for this show, with the actors’ individual talents perfectly blended into leading audiences through an insightful exploration of Ionesco’s musings on love and death.

On the technical side, I give special mention to the amazing set design of Brittany Vasta, who creates an all-too-realistic castle visibly decaying before our eyes, and to lighting designer Tony Galaska, who can darken clouds and flash lightning before creating fade-outs of the throne room and the cast that I would not have believed could be expressed with such subtlety on stage.

This production of Exit the King  is one that I would not have missed for the world. The play and its cast were well deserving of the standing ovation given by the opening night audience. Do not, under any circumstances, miss out on the opportunity of seeing it.

Exit the King  is being presented by the Shakespeare Theatre of New Jersey at the F.M. Kirby Shakespeare Theatre on the campus of Drew University in Madison through August 28th. Following each performance, there will be a post-performance discussion with director Bonnie J. Monte and members of the cast. Performances run for 90 minutes without an intermission. For tickets and information, visit www.shakespearenj.org