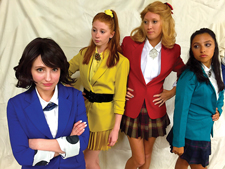 What happens when a fanatic teen boy with no positive ambitions and an outcast-turned-popular girl begin to “off” their classmates? Such is a question posed by the cult classic film, Heathers, starring Winona Ryder and Christian Slater. The answer: a lesson in teen suicide prevention and the dangers of living without hope, love, or empathy.

The players of the Downtown Performing Arts Center at the Open Air Theatre bring this adaptation of the ludicrous (or, perhaps, entirely possible) cult film to theatrical life with gusto and flair.

Producer Ginny Brennan, alongside Jordan Brennan and Michael Nappi, restage Andy Fickman’s direction and Marguerite Derrick’s choreography of the original off-Broadway production of Heathers in this DPAC alumni performance. Heathers is jam packed with pop theater song numbers and strong dance routines that move at a rapid fire pace. Solid lighting design by Laura Baker and Seth Epstein (operated by Mcafee Madding and Casey Carter) elevates the shows flashy 80s setting and compliments the outdoor space. The risqué subject matter embedded in the story of Heathers is handled with head-on fearlessness. While the simple, boldly black set speaks to the darkness in the hearts of our Westerberg High School characters.

Stepping into the Winona Ryder role, Caity MacNeill creates a Veronica Sawyer who is wholly her own and endlessly watch able. As our outcast protagonist, MacNeill drives the show with her excitable engagement, total commitment, and superior vocal ability. She is a force to be reckoned with – a quality that is essential to Sawyer’s character. Filling in for the impossible-to-fill shoes of Christian Slater, Cody Ayrer as Jason “JD” Dean hits the right emotional notes, elevating JD with his flavorful singing. As head of the Heathers – Heather Chandler, clad in pink – Kierceton Keller delivers Mean Girl’s Regina George realness. Whether playing Chandler alive or dead, Keller’s presence is a true triple threat in song, dance, and action. Playing yellow-clad Heather McNamara, the delightful Emily Cobb manages the difficult task of balancing sensitivity with comedy in addressing issues of bulimia with aplomb. She also delivers the standout vocal performance of the night in the understated song, “Lifeboat.” Ferocious Adrianna Marino rounds out the mean trio as Heather Duke, who is clad in green. Marino plays Duke with sass and verve, completing the trio’s lovely harmonies with firm voice.

Lucy Fisher is both endearing and vocally on-point as dorky Martha Dunnstock – the show’s least caricatured character. The misogynistic jocks Ram Sweeney and Kurt Kelly are respectively played by Joey Maggio and Noah Barson, who both dive-in to the over-the-top behavior of the goons. Maggio and Barson also take full advantage of the opportunity to steal the show with comedic number, “Blue.” Natalie Chernicoff surprises us with her contrasting gusto as Veronica’s mother and, also, as Pauline Fleming. Her performance of the “Shine A Light” mantra is another standout, which lifts our spirits. Zach Doimi and Collin Cenci also perform multiple roles with fine comedic chops, including the zany funeral ode, “My Dead Gay Son,” which they share gleefully.

The timeliness of the show’s heavy content is not lost on the Downtown Performing Arts Center players, who step out of character at the very end, and inform us of the very real threat suicide plays in the lives of the young people in our local communities. Suicide is the second leading cause of death in young people under twenty-four in our local area. Portions of the show’s proceeds, along with any audience donations, will directly benefit the Suicide Prevention Centers of Bucks and Hunterdon counties.

Overall, Heathers is an offbeat musical that could not be staged at a more appropriate time in the current political climate. With its heart and humor as story arsenal, the Open Air Theatre players tackle the difficult subject matters posed by Heathers with sure finesse.  The alumni of the Downtown Performing Arts Center make a compelling argument, by way of their talents and skills, for the importance of arts education. To help support the DPAC in the construction of a new, indoor theater that will serve the local community, in order to continue such education, please, consider making a donation to their cause; as well as, donating to our Suicide Prevention Centers.

At the show’s heart, Heathers the musical is about the need to listen to and address our deepest fears and insecurities. Together, we can enhance the local tradition of quality art, education, and theater, which alleviate these concerns for many of the future generations of artists to come.

In “A Christmas Carol,” less is not more