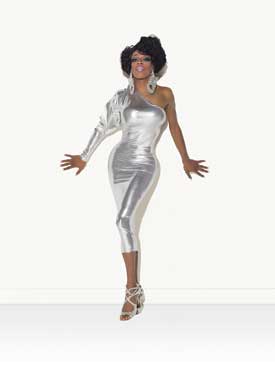 Jasmine Masters strutted into the workroom on this season’s “RuPaul’s Drag Race” and with her signature phrase “I’m Here!” she has shown us that she truly is, even with her recent elimination during the acting challenge.

Since her elimination, RuPaul herself has defended Jasmine against internet trolls who have tweeted some pretty harsh messages directed at the gorgeous Ms. Masters. Through it, Jasmine has kept her head held high and stayed sickening! She chatted with me about first being cast on “Drag Race”, her issues with another certain queen, and what’s next for Jasmine Masters.

Jasmine, we loved your off the charts personality, can you believe you left so early in the season?

I couldn’t believe it, but hey, you know, things happen.

When you got cast on “RuPaul’s Drag Race” wha’ are the first thoughts that go through your mind?

It was a shock. I heard the words, but it still wasn’t registering that I was actually going to be on the show. I had played it so many times in my head before, I just could not believe it was happening. When I really heard it, I was in the moment and I could not get out of it. It actually happened!

Some people may say that you did not get the best edit this season. Do you agree?

Not at all. They really showed what they wanted to show. If you had seen the build up that showed me saying how I really felt, viewers would have seen what I was speaking on was in response to what someone had said to me. Drama with anyone else is not my thing, I’m not that type of person, If you bring it to me though, I will defend myself.

The only part they could get me being a bitch was when I defended myself. I told Trixie (Mattel) that you had an option, be on my good side or my bad side. It was chopped to what they wanted it to look like, but there was a lot you didn’t see.

What do you think your favorite part of the “Drag Race” experience was?

Definitely meeting Kennedy Davenport. It was everything I expected it to be and more, not a let down at all. It was my first time meeting her.

What was your least favorite part of the experience was?

It definitely had to be the acting challenge. Some of the names I had to recite were so very close to my cousin’s name, and we are super close. Her daughter’s name is very close to the character’s name that I was, so it was definitely hard. It really didn’t fall the way I wanted it to. I kept saying my cousin’s name over and over again, I couldn’t get it out of my head.

What challenge do you think you would have really excelled at?

Of all of the girls left, who do you think are really going to make a big play for the crown?

Kennedy Davenport definitely, and maybe Ginger Minj also. I also had said that Trixie (Mattel) could be a winner as well. I told Trixie myself that she had a look that can take her so far. She looks like an oversized Barbie doll, and so many little kids love Barbie. Her look is very much like Nicki MInaj, who also had the human, life size cartoon style. Trixie has a great look and if she markets herself the right way, she is fantastic!

Which of the girls do you stay in touch with?

We all keep in contact. We have a text message group and we all converse on there. We talk all day, every day and I love staying in touch with them. We are all good. It’s television and you have to get over any type of issue. We all really appreciate each other and understand each other.

What’s next for Jasmine Masters?

I’d rather be helping people than pissed off and arguing. I can defend myself, as I was called names when I was a kid. I don’t brag that I’ve become so much more now, I just show it.

If you had one word to describe your life right now, what would it be?

Blessed. Without a doubt.

Shangela is back and has Pride with a purpose