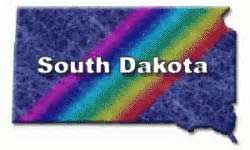 The bill’s passage marks only the first of many anti-LGBT legislation advancing through various other states such as Oklahoma, Texas and Alabama.

“Today’s signing of S.B. 149 is deeply troubling not only because it opens the door to widespread discrimination against LGBT people and children in South Dakota, but because it’s only one of many bills moving through state legislatures across the country that authorizes taxpayer-funded discrimination against LGBT Americans,” said James Esseks, director of ACLU’s LGBT Project. “These laws run contrary to one of our core American values: the rule of law, which means we are all held to and protected by the same laws. These exemptions encourage people to pick and choose which laws they are going to follow based on their religious beliefs.”

Child welfare experts across the nation sent letters opposing South Dakota’s bill in addition to family law experts and LGBT rights groups such as the Human Rights Campaign and the Movement Advancement Project.

“We’re deeply disappointed by Governor Daugaard’s decision to green light Senate Bill 149,” said Libby Skarin, policy director of the ACLU of South Dakota. “This discriminatory legislation takes South Dakota in the wrong direction, and sends the message that our leaders are more concerned with the desires of religious agencies than the rights of individuals and children in our state.”