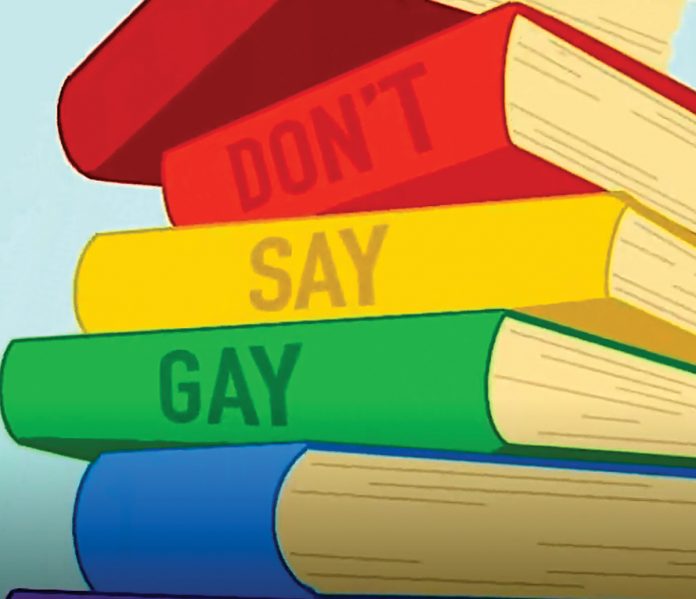 Florida made headlines for passing a so-called “Don’t Say Gay” law that prohibits the discussion of gender identity and sexual orientation for students from kindergarten to third grade in public schools. On its surface, the law, at best, erases the existence of members of the LGBTQ community. In reality, it gives parents a much bigger say in the education of their children, which can set a very dangerous precedent.

DeSantis’s office even called the legislation an “anti-grooming bill”. In a series of tweets from early March, Christina Pushaw, DeSantis’s press secretary, said, “The bill that liberals accurately call “Don’t Say Gay” would be more accurately described as an Anti-Grooming Bill.” She added, in another tweet, “If you’re against the Anti-Grooming Bill, you are probably a groomer or at least you don’t denounce the grooming of 4-8 year old children. Silence is complicity. This is how it works, Democrats, and I didn’t make the rules.”

Another part of this law in Florida allows parents to sue school districts over teachings they don’t like — and the school district will have to pay. This gives parents a ridiculous amount of power and discretion over what gets taught inside classrooms, including plans on race and inequality. It will also require schools to tell parents when their child receives mental health services, taking away a potential space safe from a student who may be questioning their sexuality or gender identity.

DeSantis and the far-right extremists are so confident in their righteousness that they’ve taken on the Walt Disney Corporation, one of Florida’s largest and richest employers. After Disney World Resort employees took a stand and staged walkouts over the company’s initial lukewarm statement, the company spoke out against DeSantis’s crusade on the “Don’t Say Gay Law.”

Previously, DeSantis had said, “If you are in one of these corporations, if you’re a woke CEO, you want to get involved in our legislative business, look, it’s a free country. But understand, if you do that, I’m fighting back against you. And I’m going to make sure that people understand your business practices, and anything I don’t like about what you’re doing.”

The Disney World Resort accounts for an average of 20 million visitors a year and employs 77,000 Floridians. The Reedy Creek Improvement District is a special purpose tax district via state law passed in May 1967 that gives the Walt Disney Company government control over its lands that house its iconic theme parks and surrounding areas. It is responsible for the resort’s water, sewage, electrical, and other utilities as well as emergency services such as ambulance and fire. DeSantis, backed by state Republicans, passed a law repealing that district. It is set to take effect in June of 2023. There is a plan to pass more legislation that would keep Disney on the hook for its billions of dollars’ worth of bond debt from the Reedy Creek District.

Feuding with a conglomerate has only boosted DeSantis’s profile among conservatives — and the hate he and his party espouses. Other Republican-party-controlled states are adapting their own versions of Florida’s law and adding amendments to further marginalize the LGBTQ community.

Alabama’s Governor Kay Ivey signed her state’s version into law as an amendment attached to a so-called “bathroom law,” restricting which bathrooms transgender folks can use. Ohio has introduced a bill that would ban instruction or other educational materials about sexual orientation and gender identity until a pupil is in third grade. The Tennessee legislature is working on a bill that would ban schools from using textbooks or other materials that “promote, normalize, support, or address lesbian, gay, bisexual, or transgender issues or lifestyles.”

Louisiana is also joining in. They have introduced a bill that would prevent instruction about sexual orientation or gender identity through the eighth grade and prohibit all public school teachers from discussing their own gender identity or sexual orientation. Texas, which made headlines for trying to legalize abuse investigations into parents whose children receive gender transition therapy, has made passing a version of Florida’s law a top priority.

LGBTQ activists are sounding the alarm that this is only the beginning of the backlash.

Creep of the Week: Florida