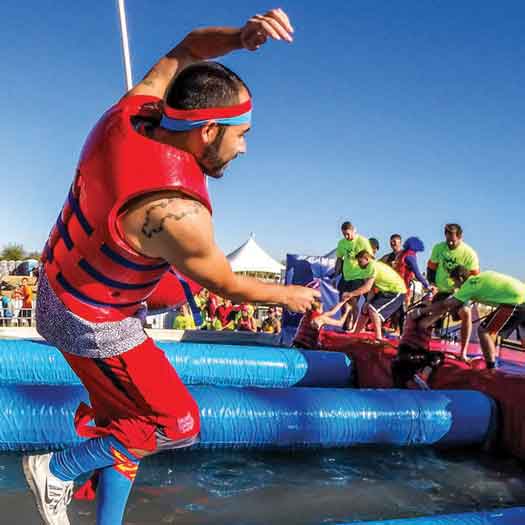 Summer bods will be hard to maintain as the sun sets on these final few dog days and the brisk breeze of autumn ushers in a serious craving for carbs. But you can keep the extra pounds at bay outside of beach season by participating in fitness and adventure events galore. From breaking a sweat in bouncy houses to pushing your limits through treacherous terrain, here are seven events widely available across the country to keep you in top shape—or at least at a steady weight, so you can stuff your face all fall and winter long. 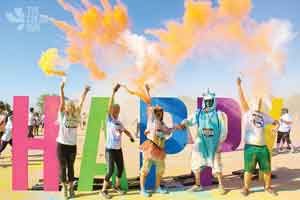 Breathtaking views and the pursuit of healthy living converge in Vacation Races, which hosts 5Ks, half-marathons, Trailfests (multi-day, 50-plus-mile adventures) and Ultras (featuring 100K, marathon and half-marathon options), set in the most majestic places in the United States, like Yellowstone and Yosemite national parks, the Shenandoah Mountains, Mount Rushmore and Joshua Tree, among a dozen-plus other spectacular, getaway-worthy landmarks and historical locations.

Billed as the “Happiest Event on the Planet” — and arguably the one with the gayest sensibility — The Color Run 5K douses white-clad participants head to toe in a rainbow of colors (in the form of edible, nontoxic powders; they’re not trying to poison you) as you run 3.1 miles through a course that this year includes a Dream Wall that allows runners to paint their aspirations, photo ops with giant unicorns, a colored Foam Zone and a Finish Festival with music and post-race sustenance. Runs are held from February to November, setting up shop in 31 states from coast to coast. 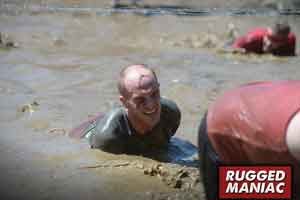 Ridiculous Obstacle Challenge (ROC Race for short) grew to more than 100,000 participants last year, all of whom were gunning to get wet, wild and a little banged up through a course of about a dozen obstacles — inspired by the ABC game show Wipeout — like the infamous Wrecking Balls, the menacing Sweeper and a finish-line glide down a four-story waterslide. Locations for ROC are limited to northern and southern California, New England and D.C.; you’ve missed this year’s last hurrah in NYC on Sept. 10. So plan ahead for the next in 2018.

Elite athletes and first-timers alike will find the strength to conquer Warrior Dash’s 12 world-class obstacles, including scaling walls, crawling through muddy trenches and jumping over fire, in this test of endurance that rewards finishers with medals and a post-race party with beer, music, and a few thousand other crusty Dashers to mingle with.

Grab a group of two to six of your closest friends and set off on a journey of adventure, exploration and a lifetime of memories during this 24-hour scavenger hunt-meets-outdoor discovery excursion that sets you on a beat-the-clock list of challenges that traverse the terrain, from urban jungle to mysterious forests to the splashy shores of our expansive coast lines. The best part is, you don’t know what you’re in for until you get there.

If you’ve checked the popular 5K races and courses off your weekend-warrior bucket list, graduating to the Tough Mudder is the next logical progression in your total fitness-event domination. Here, you’ll work your way through 10 miles of mud (tie those shoes tight!), completing challenges that include scaling a 15-foot wall, scrambling up a slippery slope, and—nipple alert!—plunging into a dumpster packed with 10 tons of ice.

Consider wearing disposable clothing to the covered-in-sludge Rugged Maniac 5K and Obstacle Course, which boasts more than 25 physical challenges like gymnastic rings above a muddy moat, army crawls beneath barbed wire, and underground tunnels over a three-mile course. When you’ve passed the finish line, clean up at available showers and join the party featuring food and bevs, a live DJ, mechanical bulls, and pie-eating and stein-holding contests. Host cities include Denver, Atlanta, Chicago, New York City, and Los Angeles, among 20-plus other areas in the United States and Canada.

Mikey Rox is an award-winning journalist and LGBT lifestyle expert whose work has been published in more than 100 outlets across the world. He splits his time between homes in New York City and the Jersey Shore with his dog, Jaxon. Connect with Mikey on Twitter @mikeyrox.

Four things I’m leaving behind in 2019

People who love their jobs do these 8 things – do you?

5 problems with living in the future

Out In Jersey covers the interests of the lesbian, gay, bisexual, & transgender community of New Jersey. 737 Hamilton Ave., Trenton, NJ 08629, Phone: 609-213-9310, email: ContactUs@outinjersey.net
© 2019 Out In Jersey | All rights reserved
Do NOT follow this link or you will be banned from the site!
MORE STORIES

Jenna Ellis has no love for LGBTQ people

Kathy Najimy tells it all