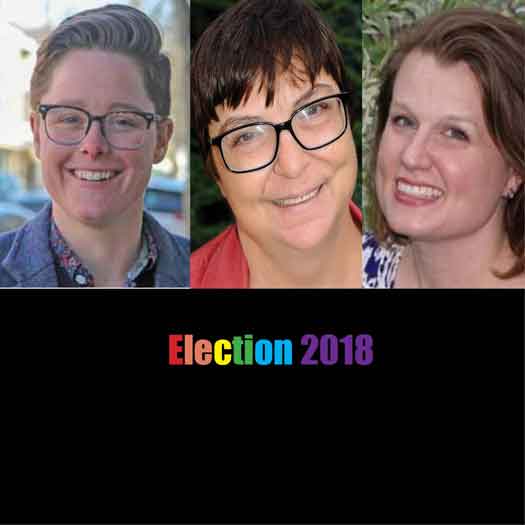 Across the nation, a record-breaking number of LGBT candidates were elected, or re-elected to office. In New Jersey three LGBT candidates were victorious. In Hunterdon County Caitlin Giles-McCormick won a seat on the Flemington Borough Council and Betsy Driver was elected as the borough’s mayor. In nearby Lambertville Julia Fahl was elected mayor.

There were several other LGBT candidates that did not make it this time around in the Garden State. In Barnegat Township in Ocean County Daniel Ward was defeated for township committee. In Monmouth County Meghan Huryk was defeated for a Neptune City council seat. In Hudson County Neil Abadie was defeated for a seat on the Board of Education in Jersey City. And in Morris County Leonard Resto was defeated in a bid to be re-elected to the Chatham Borough Council seat.

Nationwide there where some highlights for LGBTs

Senator Tammy Baldwin was re-elected to the U.S. Senate by Wisconsin voters. In Oregon, Governor Kate Brown, the first out LGBT governor in history, was re-elected to the state’s highest office. Sharice Davids of Kansas became the first openly LGBT Native American lawmaker in Congress. Jared Polis of Colorado became the first openly-gay man to be “elected” governor in the United States. Many of us Garden State folks remember that Jim McGreevey was the first gay man to be a governor, but he was closeted when he was elected to office. He was later outed in a political scandal.

A record number of out LGBT candidates were elected and re-elected to the U.S. Congress. And In Massachusetts, voters upheld non-discrimination protections for transgender people in public spaces.