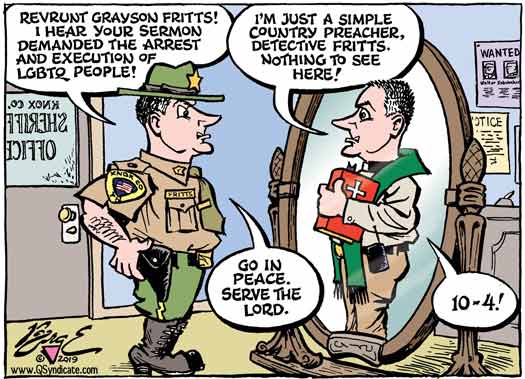 “Can we at least agree that we can hate them?” That’s a question posed by Grayson Fritts, a preacher in Knoxville, Tenn., in a sermon that’s been making the rounds on the Internet.

The “them” in question is LGBTQ people. Fritts not only hates “them” he wants “them” put to death.

“The purpose of this sermon is to show you that our government,” Fritts says, “like the federal government, the police or what have you should enforce Leviticus 20:13.”

I put “sodomites” in all caps because he literally yells it out in anger as if it’s the worst possible category on his list.

“Homosexuality, it should still be a crime, people. Just like murder and rape and all these things,” Fritts says. “Government should do their job. Instead of running radar on the interstate, why don’t you go arrest some queers, how about that?”

Again, he yells the part about arresting queers, shaking in anger.

“The Bible says the powers that be are ordained of God and God has instilled the power of civil government to send the police in 2019 out to these LGBT freaks and arrest them, and have a trial for them, and if they are convicted then they are to be put to death,” Fritts continues. “If you’re a policeman then you know what? It should be your responsibility to carry these things out. You bring them to the judges and you let the judges hear the cause and you put that animal to death.”

Not surprisingly, people are upset.

“The symbolism is extremely palpable considering it is pride month and the anniversary of the Orlando pulse shooting,” Sanders told a news outlet.

U.S. Rep. Jim Cooper (D-Tennessee), wrote on Twitter: “Let’s be very clear. [Fritts] is preaching about murdering LGBTQ people. There is no ambiguity. There is no confusion. He is suggesting the execution of our friends and neighbors.”

But when asked about his sermon, Fritts didn’t back down.

“I’m not an anomaly, he told the News Sentinel, adding that other Baptist preachers should “grow a spine” and “stand up just like I’m standing up.”

He also rejected the idea that he’s inciting violence against LGBTQ people.

Ah, got it. Average everyday people should not put LGBTQ people to death, but the government should. Not that this really softens the whole “death to LGBTQ people.”

Thankfully, as a preacher, Fritts isn’t a part of the government. But as a Knox County Sheriff’s Department detective, he totally is.

Which means he’s inciting his own damn self to violence, state-sanctioned violence, in fact. He’s saying that LGBTQ people should die and that government employees, especially police officers, should have a direct hand in their deaths.

The Knox County Sheriff’s Department has put him on paid leave until he leaves the force in July. But as of press time, he hasn’t been fired.

Meanwhile a prosecutor for the 6th Judicial District is reviewing Fritts’s cases for bias.

But don’t worry! Fritts says there’s no way his law enforcement work was ever influenced by his religious beliefs. And by “religious beliefs” let’s remember he’s referring to his hatred of LGBTQ people and his subsequent call for their execution.

To explain how he keeps his church life and his state life totally separate he compares himself to a fast food worker making a burger for an LGBTQ customer.

“I’d make them a hamburger because that was what my job would be, you understand?” he said according to KnoxNews.com. “You know, I wouldn’t try to purposefully try to damage their food or anything like that.”

Um, I’m not a law expert, but carrying a badge and flipping a burger are two very different jobs with wildly different levels of power. I don’t know about you, but I wouldn’t eat any kind of food prepared by Fritts, and I sure as hell wouldn’t trust him with my civil liberties.

Speaking of which, one of the reasons the Sheriff’s Dept. says he hasn’t been fired is because of concerns about lawsuits over “free speech.” But this isn’t a free speech issue. Calling for the state to murder people when you yourself are a member the state is incitement to violence. It is not protected under the first amendment. So fire his ass already.

Creep of the Week: Brett Kavanaugh

Creep of the Week: Patriot Front