Greetings and F.U. to Trump and his enabling Republicans who pretended COVID-19 was a Democratic hoax and STILL have no national plan to mitigate the virus, because my kid started his first day of middle school alone online in his room today. And it sucked, he reports. 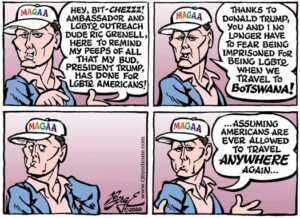 If it baffles you that anyone would still support Trump after he killed off 190,000-plus people in the U.S. through his indifference, inaction and lies about coronavirus, you aren’t alone. If it’s hurting your head, you need to do yourself a favor and shut off your logical brain that uses things like facts and science to order the world around you. Trump supporters don’t use that part of their brain.

Whether that part of your brain is active depends, largely, on where you get your news. If you read about Trump’s scandals and insanity in places like The New York Times, CNN, NPR, the Washington Post or Fangoria, then you might have the notion that breaking the law and being a misogynistic racist con man is, like, bad. If you get your “news” from Fox News, then you laugh at the idea of drinking liberal snowflake tears. You’ll also be treated to the exact same security briefing Trump himself gets when you watch Sean Hannity’s show, which I believe is called “Hannity Insanity,” and if I’m wrong all I can say is what a missed opportunity.

For so many white people in the U.S. racial justice and equality is far more terrifying than fascism. Under fascism they’ll be fine, but if faced with racial justice they might have to, you know, address this country’s horribly violent racist past and present. Fascism may be what your great grandpa fought a war about, but it’s what your uncle fantasizes about to lower his blood pressure after he sees protesters demanding that Black people not be killed indiscriminately by police on Fox News.

Trump is talking to that uncle when he rage Tweets, “LAW AND ORDER!” Funny how law and order doesn’t apply to Trump and his administration. Law and Order, you see, is what white people use to keep Black people in line. And by “in line” I mean not making pesky demands like, “Don’t kill us.”

There is nothing Trump can point to that hasn’t been a disaster during his presidency. Sure, the stock market rebounded after a huge drop, but millions are still out of work and 1,000 people a day are dying from a virus just about every other country managed to get under control in some way.

So Trump has to scare folks into voting for him. And he doesn’t care that he’s escalating clashes between anti-racist protesters and white supremacist militia groups and people are being killed.

But, of course, Trump is the president who said, “I take no responsibility at all.” For anything.

Trump has exceeded all of our most nightmarish expectations

Trump’s largely white supporters love a “strong man” and are so desperate and afraid right now they’re willing to pretend that Donald Trump is one. He’s not. He is pathetic, he is cruel, he is ignorant. But strong? No.

Remember in 2016 when everybody was like, “There’s no way in hell Trump can win. What a joke.” But he did. And now here we are in 2020 and Trump has exceeded all of our most nightmarish expectations and he absolutely has the chance to win again. And if he does, goodbye democracy. Goodbye civil rights. Goodbye marriage equality. Goodbye transgender people being treated like anything other than pariahs.

You need to vote. And, yes, voting isn’t the be-all and end all. There is deep healing work to do in this country. But we can kiss any hope of healing if faced with another four years of Trump.

Creep of the Week: Robert Fehring