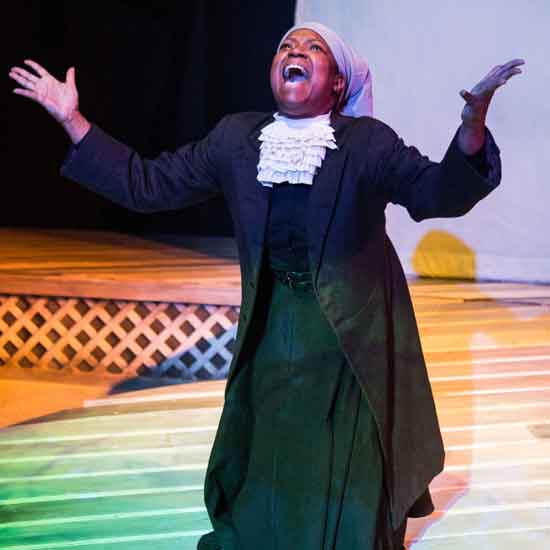 A welcome addition to the local theatre scene is Beyond the Oak Trees, from  The Crossroads Theatre Company.

Ably directed by Crossroads’ producing artistic director, Marshall Jones III, the show follows two stories. One is a fictionalized version of the final trip of Harriet Tubman, the noted conductor of the Underground Railroad, leading her last group of slaves to freedom in the North. The other is of two friends making a pilgrimage to the Harriet Tubman Home for the Aged in Auburn, New York, one of whom has received a large grant to produce a series about the African-American experience in the 20th century. While the two friends argue over the necessity of tackling the legacy of slavery in their series, two of Tubman’s escapees argue over the promise of freedom versus the surety of slavery and the dangers inherent in being fugitive slaves. A surprise twist at the end of the play provides a union of the two stories.

The standout performance comes from Abigail Ramsay in the dual roles of Harriet Tubman and Jessica, an inhabitant of the Tubman Home. Ms. Ramsay ably portrays the strength of Tubman, both morally and physically, without turning the anti-slavery hero into a plaster saint, then quickly changing into the light-hearted, can’t-do-enough-for-you hostess at the home. She is well supported by Ademide Akintilo and Elijah J. Coleman as the two friends and the runaway slaves. The simple scenic, lighting, and sound designs (by Gennie Neuman Lambert, Devorah Kengmana, and Käri Berntsson, respectively) create the perfect sense of place, whether outside under the stars or inside the Tubman Home, while Marc W.Vital II’s costumes fit the characters and the times perfectly.

The only quibble I have with the production is its use of projections in the prologue. While the images shown are no doubt well chosen, they flash by so quickly that both words and images blur, lessening their impact on the audience.

I recommend seeing this production, not only for the reminder it gives of the life of the remarkable woman whose face has been recommended to be placed on the $20 bill, but also for an airing of the more modern arguments about the importance of slavery when discussing modern race relations. “Women’s Gifts” has been the theme of this year’s season at the Crossroads Theatre, and I can think of no better gifts than those of a woman’s courage, strategy, and indomitable force of will as given to us in Beyond Beyond the Oak Trees.

Reviewer’s note: Unfortunately, due to unforeseen circumstances, the following review was not posted on line before the show played its final performance. However, playwright Kisha Bundridge is a talent worth watching, and it will be a pleasure to see not only other productions of this play but productions of her future work as well.

“A Child’s Christmas in Wales” is a charming memory play

“A Jolly Holiday” is Disney for adults

“What Doesn’t Kill You” is a one-man delight