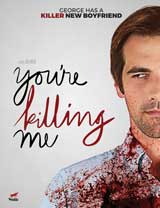 Joe is new to the Echo Park gay scene — and is as clueless as he is cute. We meet him on game night, guest of his new boyfriend, a very two-dimensional (and single-minded) buff boy named Andy. While Joe is a little on the strange side, all agree he is amazingly handsome — a trophy find for sure.

But when the party leaves, and Joe is pressed to put out, he snaps — leaves for his car, retrieves a black duffel, pulls out a hunting knife, and proceeds to use it with all the grace, skill, and dexterity — of Antony Perkins.

You’re Killing Me is comedy in the sketchiest of traditions. But it is also a love story, a romance between two star-crossed sociopaths. Who but a narcissist would fall in love with their stalker? Besides, Joe (Matthew McKelligon) is so handsome it is easy for his next boyfriend, George (Jeffrey Self), and George’s friends (who also know now-missing Andy) to forgive his quirky personality.

The murder scenes in You’re Killing Me are at once realistic and “fakistic” enough to be troubling. During the most savage stabbing of all, one can hear the click of the retracting blade even as the victim screams in terror. Still, this is precisely the kind of horror that will haunt your dreams — and your imagining next time you spy a hot stranger in a shady bar or shortcut down a dark alleyway. While the comedy tickles our consciousness, it’s the gore of this film that really drives the point home.

There are a few reasons to love this film. First, it is wicked clever, the kind of movie you will reflect on long after the roll of the final credits. Second, while the film is about narcissism in the digital age, it is not a narcissistic film itself. While it is currently fashionable to dish on Millennials, You’re Killing Me is Millennials poking fun at themselves.

Already famous for his campy YouTube parodies, The Chloe Videos, it is easy to see George as an exaggerated version of Self. But Self and Jim Hansen co-composed the script with the core actors already in mind — the entire film presents exaggerated parodies of their own game-night friends.

You’re Killing Me has got to be the most bizarre blend of comedy, horror, and romance that I have ever seen, but the experiment does pay off. Comparison with Psycho is inevitable, especially in murder #1 — and McKelligon is every bit as steamy hot as Perkins in his classic portrayal of young Norman Bates. So far as dysfunctional mother/son relationships go, this movie also ranks up there with Harold and Maude. But if I were to file this film by genre, I’d place it beside John Waters’ Serial Mom for its scathing social commentary filtered through unapologetic camp.

You’re Killing Me is not a movie you will want to watch alone. So the next time you text up a few of your game-night friends to dish out good drama, have this newly-released DVD at the ready. Preferably in a black duffel. With lots of chips and wigs and plastic knives on hand to set the proper mood. But if a dashing stranger should show up to your party, here are two questions best not to ask: “Are you stupid?” and “What’s the machete for?”

Youre Killing Me is available from Wolfe Video online.

“Petit Mal” is a film that puts love to the test