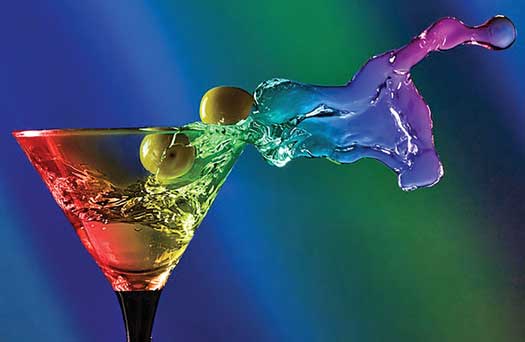 Lesbian-only bars may be fading away

You never forget your first Girl. Ain’t THAT the truth? I was a nascent lesbian at Marietta College and during finals week, a lesbi-friend sported a long sleeve t-shirt with that legend. The Girl being referenced, however, was St. Pauli Girl. That started me thinking—were there lesbian-only bars?

I was nearly 19 when I came out to myself. Coming out in the clubs is very different from coming out first to yourself, then close friends and family. It has a whole new set of protocols. At college, in a school where the ratio of men to women was 3 to 1, some lucky girl was going to get MY share. But where would I find a needle in a haystack awash with heteronormativity? The answer is at home.

Today, the lesbian-only bar may be fading away. It is a sobering statistic that at the time the documentary The Lesbian Bar Project began researching and filming, there were 21 bars in the United States that catered to female-identified people. Twenty-one. In the entire United States.

Currently, as of this writing, that number has dwindled to between 15 and 19. Let’s sit with that for a moment. Consider the number of bars and clubs whose primary clientele is male-identified community folx, that percentage is staggering. Women’s social rhythm is certainly different. Always has been, so ask yourself if you were born somewhere between the middle and the three-quarter point of the 1900s—how did you meet your first, and any subsequent girlfriends, lovers or partners? Even what we called someone with whom we were romantically inclined (or reclined, or divined) continues to change over time. So how do we, how can we, meet and where? We went to “The Bar.”

The Lesbian Bar Project explores several of the bars that are currently in operation in the United States. Some venues have opened in the last year or so in what some may consider hostile environments in the South. Erica Rose, one of the directors, sat down to talk with me regarding how she came to be a film maker and the goals of the film itself.

Rose’s parents were supportive of her natural skill as a storyteller, so when she wanted to go into film, her father suggested that at age 10 or 11 she watch the work of Martin Scorsese. Even though his subject matter was adult, there were so few role models. Penny Marshall and Jane Campion were directing, Sophia Coppola was just starting out. But when Rose was the only female in her film class, she renewed the commitment to herself to both write and film content that she would want to see. Yet as supportive as her parents were of that choice, her mom did not initially show the same level of support she now does. Rose points out that when you came out as queer, many family members found it hard to get past what you may do in bed with another person.

“I think that part of people’s discomfort with their queer children is around the non-heteronormative sex life… it’s all about normalizing our experience,” Rose said. “There is still a significant amount of work that needs to be done.”

That discomfort is lessened when we are around our chosen family, as she and Elina Street made their documentary to support the women’s bars creating community and chosen families for people whose birth families may need time to process.

People are wired to create community. Lesbian-owned and operated bars were like baby stars in the 70s, 80s and 90s. Here are some of the stories from near and far.

Dateline: South Miami, 1984. A bar called Cherry Grove is nestled in the armpit of an I-95 overpass. One of the owners of this gracious oasis, Julie, is a cop. Another one of the owners, Michael, played piano in Cherry Grove, Fire Island and loved the women there. Consequently, the bar they created had a warm environment, a welcome for each woman and a jukebox that included Jane Olivor, Janis Ian and all of the women who sang our blues. Tiny, lit by neon and warm smiles, the bar Cherry Grove catered to women and their friends. Sure, there was competition. An article in the Miami New Times talks about the culture wars and the other venues that welcomed women included Cheers as well as On The Waterfront, not far from the Miami airport on South River Drive. If you liked Latin women and new hot club music, then Miami was your scene. Fort Lauderdale was where less adventuresome folx went clubbing. Butch-Femme roles were much more common then and especially in some of the more basic places women gathered, there began to be a hunger for more upscale digs.

In the early 1990s, two club promoters—Lisa Cox and Caroline Clone—were the movers and shakers in creating spaces for women. Lesbians, or gay women as we were often known in the media, were starting to gain some traction. Ask how many of your friends have a copy of the Vanity Fair with kd lang and Cindy Crawford on the cover. We were starting to come out in media and more, and both Cox and Clone recognized the coming wave and took advantage of it. Cox started doing “Girls in the Night” where each event was in a different venue and the group even had a newsletter. Imagine attending a women-only party at an outdoor park, a mansion on Biscayne Bay or a series of night clubs and you’ll get the feel for what it was like to flex some commerce.

Caroline Clone was successful in creating parties in both her native England as well as LA and Clone created W.O.W. Bar II (World of Women, as she had created a similar event in LA). Clone’s event was weekly at Miami Beach’s Byblos. For women in the closet, even if it had an open door, moveable parties or events in venues that were “straight” the rest of the week gave a bit of privacy that was so important during the time when you could lose your job for whom you love.

Meanwhile, in the Philadelphia Metro Area during the 80s and onward, a group initially called “Ladies of the 80s” promoted moveable events as well. It was a calendar-worthy event for women, and it was in tea-dance timing, usually on Sundays from South Jersey, to New Hope to Philadelphia clubs and it was a fashion show of the latest music and the collections of Liz Claiborne, the Gap, and Banana Republic. Ultimately, they renamed themselves Ladies 2000 and the website is still active.

Oh sure, there were bars like the venerable Sneakers on North 3rd Street in Old Town Philly, where many of us heard Melissa Etheridge for the first time, knowing she was one of “us” with no confirmation except the passion in her voice. There was Mamzelles and upstairs at Seasons, and the Two-Four on St. James. Hepburn’s opened in 1989 on the former site of Equus, keeping the murals, and was open 7 days a week, yet it was closed by 1995 and lesbians had a dry year. Sisters opened its doors on Chancellor Street in 1996 and was in continuous operation to a varied female clientele, high heels to tennis shoes, until 2013, when it closed its doors. It featured a restaurant and an upscale look and was the only bar at that time to cater to women-only clientele.

New York and the surrounding boroughs had some gems of its own. Donna Guzzardi, a lifelong resident of Brooklyn, recalls that her first lesbian bar was the Duchess. Located on Grove Street in NYC, 16-year-old Donna told her mom she was sleeping at a friend’s house. This much was true. At a time when the drinking age was 18, a charismatic teen had no trouble talking her way into a venue that had women of great racial and economic diversity. On the ground floor, the small space was easily accessible but ran afoul of the law on a discrimination suit for not serving drinks to men. Ultimately, by 1982, they had lost both their liquor license and appeals. The Duchess was a gathering place for feminist women organizing for greater change, and ironically the anti-discrimination law they had worked so hard for is what hoisted them on their own petard. Later, the venue continued to be a lesbian space, first as a juice bar (non-alcoholic) and was variously named Duchess II, The Grove Café, and in its final days, Pandora’s Box. When Pandora’s closed, so did the 20-year reign of lesbians at 70 Grove.

Treasure the spaces where your life and times are made. Nothing lasts forever, except your amazing memories

Donna recalls her first time at the Clit Club, going with her girlfriend and looking at the space with nooks and crannies and saying excitedly “this place is DECADENT.” She also hung out at Crazy Nanny’s, the Cubby Hole, Ruby Fruit, Julie’s, Club Heaven, and Henrietta Hudson in New York City but only the Cubby Hole and Henrietta Hudson are still around. Henrietta Hudson calls itself a queer human space built by lesbians, and considers itself, since 1991, the longest continually running lesbian bar in the country. Still creating community, they seek to unite everyone.

There were also the moveable parties. Donna remembers Shescape, Lovergirl, Girlnation, Starlette, and Girlz Party as well as the Ladies 2000 and Feminine Connection. Women connect by dancing and wherever you go, there we are. Donna loves to travel, and she seeks out the local gathering places, yet they are all mixed. There are none that seem to cater to women only. She sighs with her memories of Chueca, Bum Bum Bar, Candy Girls Lounge, and Smiley’s, all lesbian venues and all closed now. Brooklyn’s lesbian bars were Catty Shack and Carry Nation, which is now Ginger’s Pub, which welcomes a mixed crowd as well.

Treasure the spaces where your life and times are made. Nothing lasts forever, except your amazing memories. Breathe in deep, in your mind. The cold of the air conditioning or the puff of heat when you enter, the smell of cigarette smoke, sometimes Something Else, bleach and soap, fried food and a shot of Jack, and freshly opened bottle of Miller Lite.