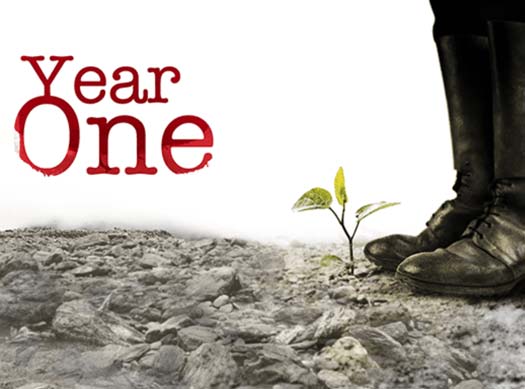 Year One is an intense, intermission-less play of strength and beauty

A society in chaos. A charismatic leader, seen as the one and only man who can lead the people to prosperity and renewed pride.  A family divided by strong feelings for and against the leader.  Those who believe in taking action in opposition—and those who believe in going along to get along. Those marking a balance between the leader’s good deeds and his bullying tactics, and those not even allowing the man’s name to be spoken.

Sound familiar? It should: it’s Germany in 1933, and we will be spending the next 90 minutes going through a year in the life of a three-generation family in Year One, a new play by Erik Gernand, directed by John J. Wooten and being presented by Premiere Stages at the Bauer Boucher Theatre Center on the Kean University campus in Union. Playwright Gernand is a major talent. He guides five characters through the Nazis’ rise in power, which changes the face of Germany in the mid-20th Century.

The play is set in and around the house of Anna, a successful surgeon and a widow who lost her husband in the First World War.  Also in the house live Rosemary, her mother-in-law, and Peter, her only son. Visiting them unexpectedly is Anna’s brother Max, a hero in the last war who is idolized by Peter and Claudia, Peter’s girlfriend who finds tales of warfare exhilarating.

Claudia’s father is a fervent Nazi supporter, and she is influenced by him. In turn, she is an influence on 18-year-old, awkward Peter, who all too easily begins to believe Nazi propaganda about Germany’s chronic inflation and unemployment—and their solutions to those problems. Anna, however, refuses to have the name Adolf Hitler spoken in her house, aghast at the methods he and his followers are using to gather power and undermine the fragile government as opposition voices are stilled from fear. Meanwhile Rosemary sees no harm in keeping silent and going along as long as the economic situation improves.

Max’s arrival from Berlin—an involuntary departure—brings a problem into the family circle. He and several of his war comrades have decided to take more aggressive action in opposition to the Nazis and their leader. When he tells Anna this, her maternal instincts kick into panic mode as she tries to keep Peter away from Claudia’s influence and that of the Nazi Party.

An amazing element of this play is the amount of casual lying the members of this seemingly close-knit family do to each other. Also, each character is sure their course of action is the correct one. Rosemary’s drifting inaction clashes with Anna’s staunch disapproval, which is as nothing when compared to Max’s radical plans for action. As for Peter and Claudia, they get to puff themselves up with the blind certainty of youth against their disagreeing, disagreeable elders.

Year One is a strong play. It makes the German political situation in 1933 resonate with audiences that lived through the political upheaval in America between 2018 and 2021.  The parallels are all there, yet they are not hammered home as a lesser playwright would have done. In viewing this family handle the times they lived in, astute theatre-goers can make the connections themselves, a hallmark of outstanding writing comparable to that in Arthur Miller’s The Crucible.

I strongly recommend you see Year One

Year One is an intense, intermission-less play of strength and beauty. It is so well-written, so involving that you could wish it lasted longer. But it is the right size for the playwright’s message to get across, and this play is one that is deserving of your attention.  I strongly recommend you see Year One before its run ends.

Year One is presented by Primary Stages at the Bauer Boucher Theatre Center on the campus of Kean University in Union thru September 26th. Audience members are required to wear masks in the building.

For more information or to get tickets call 908-737-4092 or go to premierestagesatkean.com.