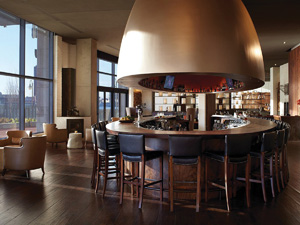 Recently making mainstream media: Chick-Fil-A has spent millions of company dollars campaigning against gay marriage. Their CEO and founder’s son Dan Cathy has publicly proclaimed Gay marriage wrong. Now, Social media is forcing the story to the forefront and lines in the sand are being drawn. Like the meat they make into sandwiches, LGBT people are on their chopping block, like prime filet.

Even the Muppets are involved. They have stood for non-traditional marriage since 1984 when Kermit the Frog and Miss Piggy married cross species and America celebrated. The Muppet organization decided they would no longer do toy promotions with Chick-Fil-A after their current puppet promotion expires.

Chick Filet’s response was to stop the promotion immediately and post a sign on counters that effective 7/19/12 Jim Henson’s Creature Shop Puppet Kid’s Meals Toys are being replaced by a free kid’s ice cream cone because of possible safety issues. The sign continues to read: “Please be advised that there have not been any cases in which a child has actually been injured, however there have been some reports of children getting their fingers stuck in the holes of the puppets.” Ah, come on guys, history has shown true Christians can lie better than that.

When the Bishop reigning over Worcester, Massachusetts found out a gay couple was making an offer on a 44 room mansion Monsignor Thomas Sullivan responded to the broker with an email. It was inadvertently forwarded to the buyer with a note from the broker stating the diocese had found ‘other plans’ for the property.

The part that wasn’t supposed to be seen follows:

“I just went down the hall and discussed it with the bishop,” Monsignor Sullivan wrote to the broker, according to the Telegram. “Because of the potentiality of gay marriages there, something you shared with us yesterday, we are not interested in going forward with these buyers. I think they’re shaky anyway. So, just tell them that we will not accept their revised plan and the Diocese is making new plans for the property. You find the language.”

Elsewhere in Massachusetts, Boston’s Mayor Thomas Manino issued a letter to Mr. Dan Cathy and Chic-Fil-A stating additional Chic-Fil-A stores are not welcome in Boston. “We are proud that our city and our state have led the way for the country on equal marriage rights”.

Philadelphia Councilman James Kenney writes: “There is no place for this type of hate in our great City of Brotherly Love and Sisterly affection.” A sentiment similar to what I heard proudly exclaimed by Mayor Michael Nutter on stage at Philly Pride June 10th.

Simultaneously, it was reported on the one-year anniversary (7/24/12) of same-sex marriage in New York City that 8,200 or roughly 10% of all marriage licenses issued last year were to same sex couples, generating $259 million for the city’s economy and $16 million in taxes.

“Marriage equality has made our city more open, inclusive and free – and it has also helped to create jobs and support our economy,” Mayor Michael Bloomberg said during a press conference. “New York has always been a great place to get married and since the passage of the Marriage Equality Act, we’re welcoming more and more couples, their families and friends from around the country and the world.”

“I hope people who think that marriage equality was somehow going to cause the end of the world can see that it has done quite the opposite. It has put people to work,” said City Council Speaker Christine Quinn. “But what you can’t quantify is just the joy that has happened in New York City.” Quinn married her longtime partner Kim Catullo May 19th and is currently in the running to be the next Democratic candidate for New York City mayor. If elected next year, she would become the city’s first openly gay mayor, and the first legally married, openly gay politician to lead a major U.S. city.

Recently, I spent two weeks in Rehoboth Beach, Delaware, a town with over 200 gay owned businesses and the rainbow flag flying everywhere. The other thing flying everywhere was cash – Dollars being spent on everything by a large vacationing gay population, and an even larger vacationing family population. Everyone seemed to be getting along just fine, and this town is thriving thanks to a large gay presence.

Last Saturday, I attended Asbury Park’s Sandblast party, a gathering of the LGBT community that took over whole hotels and beaches for the weekend. Their presence and spending were welcomed everywhere. And, now that we have the dollar and cents in the mix, let’s stir in the realities of individual liberties and justice.

Sally Ride, the 1st woman in space died this week with her female partner of 27 years unknown to the world and without benefits and protections afforded married partners.

Anderson Cooper, who for years avoided openly discussing his sexuality, felt it necessary recently to affirm he is gay publicly because he is tired of the hatred.

Yesterday, I read a list of 20 publicly gay athletes at the Olympics. With 10,500 participants, I bet there are a lot more. I guess people around the world shouldn’t root for their ‘homo’ team?

The first gay Olympic athlete I met was a young man who went to Athens. He wasn’t out then, because he couldn’t be. He still isn’t.

This past Sunday I found myself discussing Olympic champion Greg Louganis with my friend Matt O’Neill. Matt had just interviewed Louganis. He wasn’t ‘out’ during his Olympic years for all the same reasons so many continue to hide in the London games about to start.

Additionally, I’ve watched the number of fans for the Facebook page Gay Marriage USA grow by thousands more in a week to just over 200,000 followers as the social media momentum gathers steam.

I remember clearly where I was that night 43 years ago at age 12 when I truly believed America was great. Funny thing is, I still believe America is great. We’ve just stumbled some along our path.

It’s time we started acting great again and treating each other with respect so we can get where we’re going, because the mud we’re stuck in is starting to feel like quicksand.

So, here’s how I want to sum this all up:

Get out of my bedroom, get out of my life, get out of my face, and get out of Dodge before dark. Equal rights are guaranteed everyone in the Constitution, not just your definition of who is entitled to them. They are a ‘right’ not a ‘privilege’.

So many things have gone by the wayside through the years: things like the Jim Crow laws, who can own property and where, school and marital segregation, or who can and cannot vote. Whole governments have been thrown out – First… in armed Revolution as our nation was born, and later in the election booth. And, now we have openly gay men and women serving in the military to ensure us our individual freedoms. Let’s put ourselves on the right side of history from the beginning, or at least the middle.

I don’t know that I’ll ever marry. I do know this: You’re not going to tell me I can’t.

So many institutions, politicians, and organizations talk out of both sides of their mouths, WE, the people, or at least, “I” the person, can’t stand listening anymore. It’s time we vote for folks who lead by pointing direction, instead of folks who pick fights by pointing fingers.

I know what finger I’m pointing!

Please note: Since this column was written, Donald Perry, Chic-Fil-A VP of Public Relations has passed away. Reports indicated he had a heart attack. According to the Atlanta Journal Constitution, the company issued the following statement:”Don was a member of our Chick-fil-A family for nearly 29 years,” the statement read. “For many of you in the media, he was a spokesperson for Chick-fil-A. He was a well-respected and well-liked media executive in the Atlanta and University of Georgia communities and we will miss him.”

Recently making mainstream media: Chick-Fil-A has spent millions of company dollars campaigning against gay marriage. Their CEO and founder’s son Dan Cathy has publicly proclaimed Gay marriage wrong. Now, Social media is forcing the story to the forefront and lines in the sand are being drawn. Like the meat they make into sandwiches, LGBT people are on their chopping block, like prime filet.