Gay and Lesbian couples are residing throughout the state of New Jersey in every city and town according to the latest 2010 Census data just analyzed. Not many surprises so far. Many traditional gay enclaves along the New Jersey shore and in western Hunterdon County seemed to remain as popular as ever in the latest US Census 2010 data.

The surprise in the data is a statistically significant amount of lesbian couples raising children in Southern Cumberland and nearby northern Cape May County. This was a bit of a surprise to some when the data was released. The reasons may be many – but lower rents and taxes may be the reason.

The data showed that many of New Jersey’s urban areas along major mass transit lines and major highways were also more attractive overall to same-sex couples. This was even more true among the 24% of lesbian and gay couples raising children in New Jersey.

Many more same-sex couples live in Hudson and Essex County than anywhere else in the Garden State. These are two of the largest counties by population – so this is an expected result. But Hunterdon, Monmouth and Camden County also have a statistically significant and higher percentage of gay households per thousand residents. This is especially true in Western Hunterdon County which is where Lambertville is located just across the Delaware River from New Hope PA. 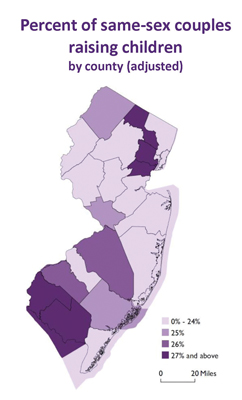 As discussed, Cumberland and Cape May Counties in southern New Jersey have a growing LGBT population. The 2010 Census data showed this to be a new and popular enclave for lesbian couples and those gay and lesbian couples raising children. Several factors could be at work in this very rural area with many very small towns that are atrractive to families of all types and housing that has been historicly less expensive. Another area with higher percentages of lesbian couples was in Hunterdon and Warren Counties – although there were fewer same-sex couples raising children in those northern counties.

The Williams Institute analyzed all of the New Jersey Census data to garner the snapshots on New Jersey gay couples and where they live and whether they are raising children. No accurate and official data can be garnered about single LGBT New Jerseyans from the current census data. But many demographers say single and younger LGBT people probably mirror many of the same patternes of residency that partnered LGBT couples have – except that they would be more likely to reside in larger cities and more urban areas nearer to to the largest cities such as New York and Philadelphia. The Williams Institute Census data cannot count single LGBT persons because they are not in any way identified seperately in the US Census data.

The small enclave of Ocean Grove, the town of Lambertville and the city of Asbury Park led the list with the most same-sex couples per thousand residents in the Census data. Collingswood near Camden and Upper Montclair in Essex County rounded out the Top 5 places to live percentage wise for gay and lesbian couples in the Garden state per thousand residents. The actual numbers of reported lesbian or gay couples in each municipality; Asbury Park (289), Collingswood (152), Upper Montclar (89), Ocean Grove (88) and Lambertville (87).

Essex County leads with the most same-sex couples households at 2,819 with Hudson County close behind at 2,726. The other three counties in the top five are Monmouth (1,962), Camden (1,557) and Hunterdon (486). As a total percentage of reported households the numbers were very close with Hudson leading at 11.06 per thousand residents.

So how does the Census Bureau identify same-sex couples?

Same-sex couples are identified in households where Person 1 describes his or her relationship with another adult of the same sex as either a “husband/wife” or “unmarried partner”.

Historically, US Census Bureau data on same-sex couples have been a critical resource for informing the many national, state, and local debates about lesbian, gay, bisexual, and transgender (LGBT) rights. The Williams Institute has been a leader in disseminating and analyzing these data since the 2000 Census. 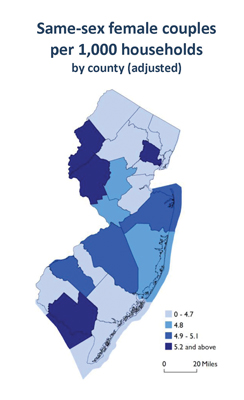 How accurate are the Census counts of same-sex couples?

There are at least two reasons that Census figures may reflect an undercount of same-sex couples. It is possible that some same-sex couples may be unwilling to identify themselves as such on the Census forms due to concerns about confidentiality. Same-sex couples may experience stigma and discrimination and consider it too risky to identify as spouses or unmarried partners on a government survey like the Census. Instead, they may choose to call themselves roommates or unrelated adults.

The Williams Institute conducted a survey of same-sex couples just after Census 2010 and found that about 15% either identified themselves as something other than spouses or unmarried partners or were in a household where neither partner was Person 1. Overall there was a self reported increase in same-sex couples households in New Jersey in the ten years between the 2000 and  2010 US Census reports. The Williams Institute however strongly cautions against using the reported increases in the state of New Jersey or any particular area as any indication of a trend as the 2000 US Census counted same-sex households in a different way that was far from statistically accurate.