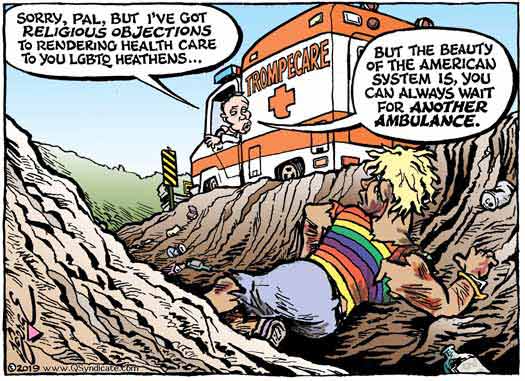 The outlook for LGBT folks is looking rather grim

Though 2019 is only about six months old at this point, the outlook for LGBT folks is looking rather grim. Discrimination based on religious beliefs is becoming more and more commonplace. Many recent court rulings have been in favor of the discriminator.

Businesses that donate to anti-LGBT causes are bolder about disclosing where your money actually goes and a court ruling supports open discrimination against transgender athletes. The President of the United States is discharging trans troops from serving their country. A conservative Supreme Court of the United States has agreed to consider whether it’s illegal for employers to discriminate against gay or transgender employees.

All of this has hit us at once with Donald Trump and Mike Pence acting as poster children for the religious right movement. Pence’s wife proudly works as an art teacher at a school that prohibits LGBT students, or students with LGBT parents, from attending. Trump has taken meetings and shared meals with hard-right leaning advocacy groups that openly denounce and deride transgender service members and marriage equality.

Recently, Trump expanded a “conscience rule,” which allows health care workers who oppose abortion, sterilization, assisted suicide, and other medical procedures on moral or religious grounds. The rule comes with guidelines that threaten health care institutions with the loss of federal funds should they not support the rights of such workers. The rule, which comes in at 440-pages, was called overly broad by some advocacy groups. It has raised fear that it may imperil care for patients seeking reproductive health as well as LGBT patients and their children.

“The rule allows a very wide range of people—from the receptionist to the boards of hospitals and everyone in between—to deny a patient’s medical care if their personal beliefs get in the way,” said Fatima Goss Graves, the president of the National Women’s Law Center.

The rule was issued by the Department of Health and Human Service’s Office for Civil Rights, which has been expanded under Trump. There is now a conscience and religious freedom division within the office.

The expansion of the “conscience rule” is just one of several policy changes that have happened under this administration. The administration has already created exemptions for the Affordable Care Act’s requirement that employers include contraceptive care in their health plans. This is currently being fought in the courts. Another proposal would roll back a rule issued by President Barack Obama that prohibits doctors, hospitals, and health insurance providers from discriminating against transgender people. If it goes through, it would strip away significant gains that transgender people have made in getting access to medical care, especially gender reassignment procedures which many insurers have denied coverage for in years past.

The existing rule was adopted in 2016, to carry out a civil rights law included in the Affordable Care Act. The law prohibits discrimination based on race, color, national origin, sex, age, or disability in “any health program or activity” that receives federal financial assistance. Almost all practicing physicians in the United States were covered by this rule since almost all of them accept some form of federal funds.

The Trump modification comes after a federal judge in Texas pointed out that Congress had prohibited discrimination based on sex but not transgender status.

“That is an excruciatingly narrow and legally incorrect definition of the term ‘sex’ that would jeopardize legal protections for lesbian, gay, bisexual and transgender people,” Jennifer C. Pizer, the law and policy director at Lambda Legal, said.

“If the Trump administration rescinds the protections against sex stereotyping and gender identity discrimination, the effect will be potentially devastating not just for the trans community, but for any other patients who are gender-nonconforming, including lesbian and gay individuals,” said Jocelyn Samuels, who was the director of the civil rights office under President Obama. She also helped put that rule into place.

LGBT civil rights are at risk

Though LGBT rights and freedoms are at risk overall, the transgender community is being hit the hardest by Trump’s evangelical right agenda. Since the start of his presidency, most of the anti-LGBT movements have targeted transgender citizens, with the biggest blow so far coming to transgender service members.

Trump’s ban, which started as a late-night Tweet in 2017, gained momentum until taking effect on April 12th of this year. Lawsuits were filed against the administration, with several lower courts ruling that the ban was unconstitutional and keeping it from going into effect. The Supreme Court essentially green-lit the ban, allowing it to go into effect, while the lawsuits continued.

“In implementing ‘Don’t Ask, Don’t Tell’ for transgender troops today, the Trump administration has put petty politics above military readiness, and personal prejudice above the genuine judgment of military leaders, who have made clear that inclusive service has succeeded for the last three years,” Aaron Belkin, director of the San Francisco-based Palm Center, said. “Today our nation lurches backwards in a disgraceful retreat from the arc of our civil rights history.”

The Defense Department has said that the policy is medical-based and applies to every service member though the language of the policy addresses conditions specific to transgender men and women. Though it is not technically a ban, it will keep many transgender service members from serving. A description provided by the Pentagon says that the policy discharges service members who are diagnosed with gender dysphoria or are prescribed transition-related care at a later time. For enlistments, a history of gender dysphoria will disqualify them unless they serve as their biological sex. Those who completed transitioning genders are outright banned. There is one exemption, which allows transgender men and women who came out during the Obama era to continue to serve and receive transition-related care. However, this status could jeopardize promotions, change of services, or when they seek to re-enlist. The ruling affects an estimated 15,000 active and reserve troops and those who come out or are outed as transgender can be discharged while those who transitioned before the April 12th implementation will be allowed to continue to serve.

The DOD regulation also instructs service secretaries to add gender dysphoria to service-specific lists of ‘administratively disqualifying conditions’ that DoD regulations label congenital or developmental defects. American Medical Association President Barbara McAneny said, “the only thing deficient is any medical science behind this decision. The AMA has said repeatedly that there is no medically valid reason—including a diagnosis of gender- dysphoria–to exclude transgender individuals from military service. Transgender service members should, as is the case with all personnel, receive the medical care they need. There is a global medical consensus about the efficacy of transgender health care, including treatment for gender dysphoria.”

Not all military branches have complied with the archaic ban. The National Guards in Nevada, Washington State, Oregon, California, New Mexico, and most recently New Jersey, have refused to implement the ban in their units. Governor Phil Murphy issued an order to exercise every available option in New Jersey that would allow transgender individuals to serve openly.

“As I have stated before, President Trump’s policy targeting transgender individuals who wish to serve in our military is abhorrent and un-American,” Murphy said. “I am proud to join with Governors in sister states, including California, Nevada, New Mexico, Oregon, and Washington, in declaring firm opposition to this policy and announcing my intention to use every option available to allow transgender individuals to serve in the National Guard. Under my administration, New Jersey has joined the multi-state coalition that has urged the courts to strike down the transgender ban as unconstitutional, and we will continue to fight this bigoted policy and defend the rights of all New Jersey residents.”