Turning Off the Morning News at Princeton’s McCarter Theatre

Playwright Christopher Durang and the McCarter Theatre Center in Princeton have long had a fruitful relationship. His first commissioned play for McCarter, Miss Witherspoon, went on to become a finalist for the 2006 Pulitzer Prize. His second, Vanya and Sonia and Masha and Spike, won the 2013 Tony Award for best play. 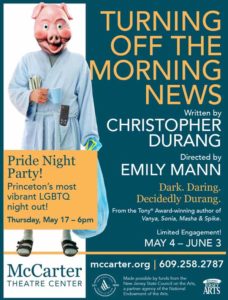 Now, McCarter’s third commission from Mr. Durang, Turning Off the Morning News, is making its premiere at the Berlind Theatre. With this wildly funny play, Mr Durang and McCarter have themselves another hit.

In a suburban neighborhood we meet Jimmy (John Pankow), who cheerfully announces his intention to go to the local mall, kill many people, then shoot himself — or maybe write a novel instead. His wife Polly (Kristine Nielsen) is a cheerfully dim-witted nonstop talker. Their 13-year-old son Timmy (Nicholas Podany) is by turns aghast at and mortified by his parents’ behavior. Across the street live housemates Clifford (Robert Sella), who handles the stress of living by turning off news broadcasts and listening to classical music, and Salena (Rachel Nicks), a young divorceé. Finally, there is Rosalind (Jenn Harris), who wears a pillowcase over her head in fear of getting skin cancer from the sun.

The six come together at a cocktail party at Clifford and Salina’s home, bouncing off each other’s idiosyncracies. Afterwards, what started out as talk appears to turn into action.

The cast of Turning off the Morning News

Emily Mann leads a strong cast through the absurdities Mr. Durang devises, displaying a gift for directing comedy. John Pankow’s will-he-or-won’t-he performance leaves the audience in doubt about the seriousness of Jimmy’s intentions right up to the very end. The formidable Kristine Nielsen, a veteran of other Durang plays, spreads verbal chaos with every utterance. Twenty-one-year-old Nicholas Podany gives a fine portrayal of a neglected, unhappy child whose family finally pushes him past his limits. Robert Sella, Rachel Nicks, and Jenn Harris create quirky characterizations, somewhat off-balance, running on their own internal logic.

Scenic designer Beowulf Boritt, who also did this season’s Stones in His Pockets, has created a satiric set full of cookie-cutter beige houses with perfectly trimmed emerald green lawns, framed by a bright blue TV screen-shaped proscenium. The suburbia of Mr. Boritt’s imagination is enhanced by Jeff Croiter’s lighting and the original music and sound design of Mark Bennett.

Christopher Durang uses absurdity to give his audiences a funhouse mirror look at today’s society. Though some of the humor is dark, he has created a play that is about making one’s own better future, and the director and cast help convey that message with humor and grace. This is a comedy that may take a little getting used to, but as it grows on an audience the result is a laugh-filled and hope-filled evening’s entertainment.

For a dark comedy with a warm center like a molten chocolate cake, I strongly recommend seeing Turning Off the Morning News.

Turning Off the Morning News is presented by the McCarter Theatre Center at the Berlind Theatre on the campus of Princeton University through June 3, 2018. There is a LGBT Pride Night event tonight, May 17, 2018. For tickets and more information, visit mccarter.org.