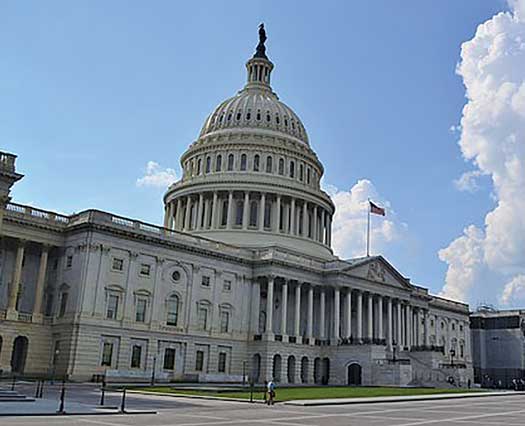 LGBT members of Congress call for the impeachment of President Trump

U.S. Senator Kyrsten Sinema, one of the Senate’s two openly LGBT members, was one of the first and only senators to speak Wednesday afternoon during debate over the final certification of electoral votes for President-elect Joe Biden by Congress. By the end of the day, several openly LGBT members of Congress were calling for the immediate impeachment or removal of President Trump.

CNN reported that there was an “armed standoff”

That’s because the certification proceedings, which began at 1 p.m., were disrupted after about one hour when thousands of Trump supporters, acting at the direction of President Trump, marched to the U.S. Capitol building and broke into the Senate and House chambers. By 2:47 p.m., CNN reported that there was an “armed standoff” at the House front door, and security officers were trying to stop an armed gunman at the House front door.

A Getty news photo of the hours-long attack showed House security officers with guns pulled and aimed at the main entrance to the House floor, as members of Congress ducked for cover. It appeared one or more panes of the House door had been broken. Another set of photos showed a protester scaling over a wall to the floor of the Senate and sitting in the chair of the chairman.

Television news reports described the crowd as “out of control,” and images outside the Capitol building showed rioters breaking windows and forcing entry into the building. Proceedings in both the House and Senate were suspended quickly and legislators were either sequestered in their offices or taken to an undisclosed location.

“We are seeing a coup attempt playing out,” said one CNN reporter. It was a term—“coup”—used repeatedly throughout the rest of the day by many people in Congress and the media.

The rioters marched to the Capitol after hearing a 53-minute speech by Trump on the Ellipse in front of the White House. After repeating comments he has made many times claiming that the presidential election was rigged against him, he beckoned protesters to march to the Capitol and “take back our country.”

After protesters forced disruption of the Senate proceedings, Trump posted a message on Twitter, saying, “Mike Pence didn’t have the courage to do what should have been done to protect our Country and our Constitution, giving States a chance to certify a corrected set of facts, not the fraudulent or inaccurate ones which they were asked to previously certify. USA demands the truth!”

The message was apparently a reaction to the release of a letter by Pence Wednesday morning, directed to members of Congress, telling them that it would be “antithetical” to the Constitution for him, as vice president, to decide which electoral votes should be counted.

Trump had made clear in previous speeches that he was hoping “Mike Pence will come through for us.” Pence, as vice president, has the responsibility of presiding over the electoral vote certification in Congress. The certification process is typically a routine ceremony; but, Trump had organized a group of senators and representatives to raise objections to the electoral votes of some key states.

Because the confirmation process goes in alphabetical order, Arizona was the first state to announce its electoral votes were for Biden. Legislators from the House and Senate announced their objection, and the two chambers had separated to debate the objection for no more than two hours. The state-by-state process was expected to continue late into the night and, perhaps, the next morning. But after barely an hour into the first debate, the rioters’ incursion brought the proceedings to a halt.

Within about an hour, Sinema and many of the Senate and House’s other openly LGBT members, posted Twitter messages, indicating they were safe.

“I am safe but I think it’s disgraceful that our country has to experience this violence because of Trump’s lies, conspiracies, and un-American attacks on our Democracy,” said Senator Tammy Baldwin (D-Wisc.)

Shortly before the Senate went back into session at 8 p.m. Wednesday evening, Baldwin posted a Twitter message, saying “Trump will not stop this attack on our Democracy. He continues to encourage it. Everyone in Congress should put country over party and condemn Trump for starting this attack. Let’s stop it by getting back to our job of accepting the election that Trump clearly lost and Biden won.”

When the Senate re-convened, Pence condemned the attack on the Capitol, saying, “violence never wins.”

Senate Majority Leader Mitch McConnell called it a “failed insurrection” by an “unhinged crowd,” and vowed the Senate would not be intimidated.

Senator Charles Schumer, who will soon take over as Majority Leader, called the rioters insurrectionists and said they should be prosecuted. A number of U.S. attorneys around the country indicated they intended to do just that.

U.S. Rep. David Cicilline posted a message on Twitter saying, “the president caused” the attack on the Capitol. “We should impeach and convict him tomorrow,” said Cicilline.

One of the House’s new LGBT members, Rep. Mondaire Jones of New York, posted a message on Twitter, saying “Donald Trump has incited violence against the legislative branch of the United States Government, encouraging thousands of his supporters to storm the Capitol, and must be impeached again.”

Senator Sinema spoke early Wednesday, just minutes before rioters encroached the U.S. Capitol building, prompting officials to suspend debate. She assured colleagues that the vote for president in Arizona was fairly conducted and that the state’s 11 electoral votes properly represented the vote of the Arizona population for Democratic presidential candidate Joe Biden.

the Washington Post editorial board called for Trump’s removal

Openly gay Rep. Mark Pocan said he thinks the 25th Amendment should be invoked so that Trump can be removed from office “in hours.” He was not alone. At 7:30 Wednesday night, the Washington Post editorial board also called for Trump’s removal, saying “his continued tenure in office poses a grave threat to U.S. democracy. He should be removed.”

“The president is unfit to remain in office for the next 14 days,” said the Post. “Every second he retains the vast powers of the presidency is a threat to public order and national security.”

After much impassioned debate on the Senate floor, with all but one senator in attendance Wednesday night, the Senate voted 93 to 9 to reject the objection to Arizona’s electoral slate. The House also rejected the challenge, 301 to 122.

At deadline, the House and Senate were proceeding on the certification.