Every morning my routine is exactly the same; first, open one eye, and pat the cat who is sitting on me and ordering me to get up, then stagger to the bathroom. Next, somehow find my way to the kitchen, feed the cat, make coffee, and turn on CNN. At this point the day may be said to actually begin. We take coffee very seriously in our house. I warn you now — if I am ever your guest, do not serve me instant coffee. Because I am a WASP, I will smile, and say it is delicious, but the minute your back is turned I’ll pour into the nearest potted plant. Over that freshly ground, fully Cuisinarted mug of steaming excellence, I expect CNN to tell me what is going on in the world. It isn’t CNN’s fault that this no longer actually happens. What I’m told about is invariably the latest atrocity committed by the president. His newest offensive, petty, self-aggrandizing tweet storm sucks all the air out of the newsroom, and leaves no choice but to talk about it. 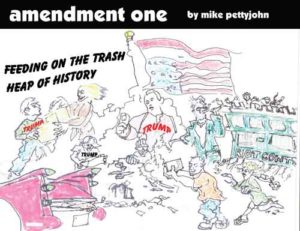 The president’s supporters, and White House lackeys claim he is just “hitting back,” defending himself from his many critics who leave him no choice but to respond, in kind, and twice as hard. As in so many other ways, Trump could take a lesson in self-restraint from the Royal Family. There was a time when England’s royals were treated with deference, and respected by the media — then came slime creature from the pit of shame, Rupert Murdoch. Murdoch’s gutter press empire proved no insult, no fabricated scandal, no vile intrusion into personal privacy was too extreme when it came to selling newsprint. The royal response to years of this trash talk has been to ignore it, to preserve dignity by not stooping to the low level of the mudslingers.

Murdoch discovered there is a large part of the public that feeds on trash, and will pay well for it. This is the lesson the president took away from the Murdoch example. Preserving dignity is not a presidential concern — he has none, and has never seen a need for it. He and his advisors discovered that a very large segment of the American public has been entirely left behind by the rapid social, and legal changes of the past 50 years. Our clueless, troglodyte fellow citizens have long been stewing in resentment that they can no longer tell racist jokes, demean women, discriminate against LGBT people, make fun of Native Americans with stupid “team mascots,” keep “those people” out of the neighborhood, fly the stars and bars flag of slavery, or let their swinish offspring bully weaker kids in school. That, and more, is a whole lot of stuff to resent. Add to that the exposés of their adored televangelists as money-grubbing snake oil salesmen (which, of course, their followers reject regardless of facts,) and the relentless preaching of the fundamentalist mega-churches that “Christian” America is under attack, and you have a wide, and deep pool of bitter resentment indeed.

This resentment is further deepened by the perception that the nation’s elite is ignoring them. The mainstream media, the Ivy League educated inner circles, the professional classes, the religious denominations with traditional social cachet such as Episcopalians, and Presbyterians do not offer the seething resenters a voice, and for good reason; they have nothing to say worth listening to. They are ignored and they should be ignored, because they are reactionary slobs with mental defects, many of who couldn’t find their way out of a paper bag without a road map. I say “mental defects” advisedly because academic studies have repeatedly shown there are two kinds of people in this world; those whose opinions are shaped by facts, and those to whom facts don’t matter when they conflict with dogmatic belief. Guess which category the president’s base supporters fall into. There is no prize for guessing correctly, because the answer is so bloody obvious.

So, does that mean that if you are a supporter of the president, you are a stupid, ill-educated, dogmatic, socially regressive, homophobic, bully? No, not at all. You might merely be one or two of those things, or you might be a venal, self-serving one percenter who sees the whole issue in terms of possible tax advantages. Whatever – you are dining on the trash heap of history – eating the garbage your betters have thrown away to rot, and fester in dark places, and the president is sitting on top of the midden pile with a big spoon, loading the garbage into his twitter account morning after morning for the “boobsoise” of America to load up on its empty calories. Did that sound elitist? Well, if it’s elitist to have an education, read books, respect facts like climate change, and not excuse racism, and the demeaning of women as “locker room talk,” then so be it.

It has been often and well said, “you are what you eat.” It isn’t going to be Vladimir Putin or the Chinese who drag this nation down. Our steady diet of trash — intellectual, moral, and the real food on the table – is doing the job effectively, and quite without foreign help. In the immortal words of Pogo, “We have met the enemy and he is us.” It’s enough to put me off my coffee.

Toby Grace is Out In Jersey magazine Editor Emeritus.

We are all in this together