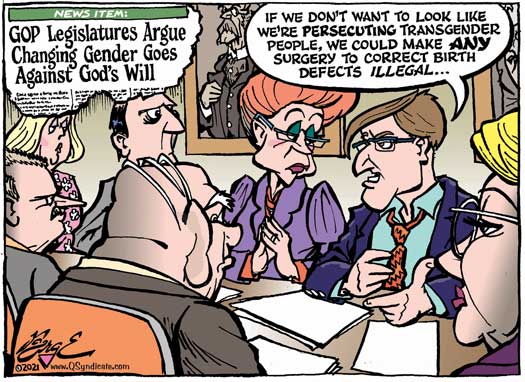 Discriminatory laws targeting trans girls who want to participate in sports are fast gaining momentum at the state level. More than 20 states have introduced bills that would ban trans girls from competing in public school athletics, with a few states already putting those laws into effect.

Bolstered by the rhetoric of former president Donald Trump and his constituents over the last four years, conservative lawmakers have been proposing these bans in droves. The laws target athletes in the name of protecting the sanctity of girl’s and women’s athletics, claiming that pre-transition levels of testosterone give trans athletes a competitive advantage over competitors who were assigned as female at birth.

At the beginning of April, Governor Brad Little of Idaho signed the Fairness in Women’s Sports Act into law, which effectively bars transgender girls from participating in girls’ and women’s sports. It also legalizes asking girls and women to undergo sex testing to compete, a humiliating and invasive procedure. Idaho is the first state to pass such legislation into law.

“We physically cannot compete against biological boys. We just cannot. And once these opportunities are lost, they are gone. You cannot get those back,” said Representative Barbara Ehardt. She is the bill’s sponsor and a former NCAA Division 1 basketball player. “This could literally tear teams and communities apart,” she said.

“We are disappointed that Governor Little signed such an extreme and mean-spirited law,” Asaf Orr, the director of the National Center for Lesbian Rights, said in a statement. “House Bill 500 is a direct assault on the health and wellbeing of young transgender Idahoans, who already face enormous challenges. This is a heartbreaking day for these young people and their families, who have now been sent a toxic message of rejection and exclusion by elected officials in their own state. We stand with these families and will do all we can to support a legal challenge to this hateful law.”

New Jersey and 19 other states have trans-inclusive sports policy. They allow the full inclusion of trans athletes. In 16 states, there is no clear statewide policy. Seven other states require hormone therapy for trans girls, emulating a rule put in place by the National Collegiate Athletic Association (NCAA). There is an outright ban of trans girls from girls’ sports teams in eight states, forcing them to compete on teams that correspond with their gender assigned at birth. Texas, one of the states with a ban, was in the spotlight for making Mack Beggs, a trans boy, wrestle in girls’ competitions because he was not allowed to compete as his identified gender under state law.

There are no hard statistics to show how many of the thousands of female public school athletes nationwide are transgender. This doesn’t stop groups like the Alliance Defending Freedom, the Family Policy Alliance, and Save Women’s Sports from waging a largely false and fear-mongering campaign against trans athletes, say trans advocates.

The three conservative groups have had a large hand in helping these laws get written and onward to legislation. In Connecticut, The Alliance Defending Freedom filed a lawsuit on behalf of four cisgender female runners because two trans runners—Terry Miller and Andraya Yearwood—combined to win 15 championship races between 2017 and 2019. One of the AFAB runners, Chelsea Mitchell, defeated Miller in their two races in February 2020. Other complaints are cited by the ADF. They include a track coach in Hawaii who filed a complaint over a trans girl competing in a girls’ volleyball and track event; a cisgender girl in Alaska who defeated a trans sprinter and appeared in a Family Policy Alliance video. She claimed that the other runner’s third place finish was unfair to the others who finished behind her.

Miller and Yearwood’s lawsuit was dismissed at the end of April. As part of the decision, it was noted that “Title IX (of the Education Amendment of 1972 that prohibits discrimination based on sex in education programs or activities that receive federal funding) requires schools to treat transgender students consistent with their gender identity.”

“Transgender youth, just like all other youth, belong in our schools and on our sports teams,” Elana Bildner, staff attorney for the ACLU of Connecticut, said in a statement. “Trans students’ humanity, dignity, and ability to be full members of their school communities should never be up for debate. Connecticut’s laws preventing discrimination against transgender people and its policies preventing discrimination against trans youth in school and sports are consistent with federal law. The dismissal of this meritless lawsuit is a victory for trans youth in Connecticut and across the country, and it would not have been possible without incredible bravery from Andraya and Terry, who have carried more on their shoulders as two Black trans youth than most adults face in a lifetime.”

Trans advocates say the supporters of these harmful bills ignore science and biology. A high natural testosterone level does not automatically translate to a physical advantage. Neither does height unless it’s a sport like basketball or even soccer, where certain positions require a taller person for advantage. Biology and genetics are the key players, with physique giving an advantage depending on the sport. Distance runners are built differently and have a different muscle structure than, say, an athlete that participates in track and field throwing events or gymnastics or tennis.

Creep of the Week: State of Florida’s anti-trans athlete law