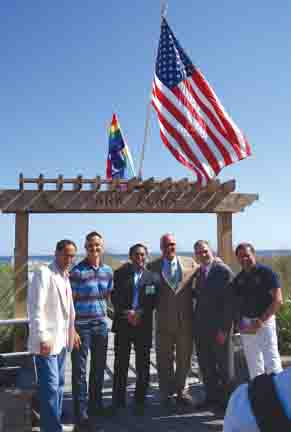 The musical review, The World Goes ‘Round, is the July presentation at the Bucks County Playhouse in New Hope, Pennsylvania.  Run, don’t walk to see it.  The last performance is July 21. The show features songs of the famous theater duo John Kander and Fred Ebb, the revue gets its title from their song which Liza Minelli made famous in the film, New York, New York.

Conceived by Scott Ellis, Susan Stroman, and David Thompson, who many may know are the same trio who collaborated with Kander and Ebb on their musical, Steel Pier.

Broadway standards in the show include songs from such favorites as Chicago, The Rink, and Cabaret, as well as less known numbers from 70, Girls, 70, Woman of the Year, and Kiss of the Spider Woman, among others.

The five talented performers are all equity members and two are Tony nominees. Theye were aided by six offstage musicians. The cast includes: Michelle Aravena, who has worked on Broadway in A Chorus Line, Jersey Boys, and many others; Janine DiVita, who has appeared in The Mystery of Edwin Drood and Grease; Tom Hewitt, who has appeared in Jesus Christ Superstar, Chicago, Dracula, and The Rocky Horror Picture Show as Dr. Frank N. Furter (Tony nomination) (With Mr. Hewitt’s fine performance of the title song from Kiss of the Spider Woman, can we hope for it being presented here with him?); David Josefsberg, who has appeared in the Papermill Playhouse production of Lend Me a Tenor, and who will be appearing in Papermill’s and Broadway’s Honeymoon in Vegas; and Emily Skinner, whose credits include Side Show on Broadway (Tony nomination).

Don Stephenson, the director, has most recently appeared locally directing Lend Me a Tenor at The Papermill Playhouse.

The five actors/dancers/singers performed their solos, duets, and group numbers with equal finesse and ease.  To some, their performances may have been benchmarks to cherish for years to come. Exciting interpretations were too numerous to write about here.  All five performers were fine.  In addition to all of the demands placed on them, there was some choreography, rapid costume changes, as well as a remarkable number from The Rink performed while roller skating.  Talk about multi-talented.

There are some readers who might ask, “Why go to Pennsylvania when I can go to New York City to see a Broadway musical?” Well, to do that comparison is like comparing apples to oranges.  Yes, one can get into the car, put $20 worth of gas in for the trip, pay tolls, spend 3 hours driving, parking, and Broadway prices which may be discounted to as little as $60 or $80 dollars a seat, or go to other, equally fine venues (or better) at a place like New Hope or Philadelphia for a completely different, sometimes more pleasurable experience.

Our pleasant evening started with the warm greeting and pleasant smile from the parking lot attendant. For $15 we parked 30 feet from the theater. How many times does that happen in New York? The lovely theater, completely rehabbed and opened in 2012 has impeccable sightlines.

The next production beginning July 25th is Summer of ’42, a musical written in 2002, based upon the eponymous film, with book and direction by Hunter Foster. Tickets are priced from $57.50 to $29.00.  Visit http://www.bcptheater.org for more information.

The musical review, The World Goes ‘Round, is the July presentation at the Bucks County Playhouse in New Hope, Pennsylvania.  Run, don’t walk to see it.  The last performance is July 21. The show features songs of the famous theater duo John Kander and Fred Ebb, the revue gets its title from their song which Liza Minelli made famous in the film, New York, New York.

Kristin Chenoweth returns to music & Broadway “For The Girls”

Two Boys Kissing will bring you to life