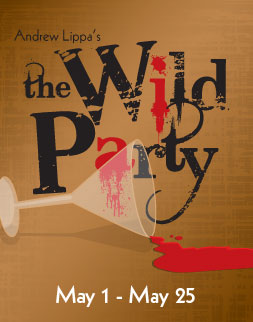 “The Wild Party” is a wild party indeed. Based on an epic poem by Joseph Moncure March, and borrowing the poem’s words for its lyrics, it is billed as a musical, but is more an operetta. Very little of the dialogue is spoken. Most of it is sung in a bold, brazen, somewhat dissonant but still melodic contemporary score.

The play is set in the New York ’20s Jazz Age when the “Roarin’ Twenties” was a full blown juggernaut. In fact, that is the name of one of the songs. The characters are a motley crew of so-called low-life’s who sing and screw, among other things, for a living. They live just to get through another day, helped by sex, boot-legged liquor and other mind-altering substances, and drama, drama, and more drama. Most hook up for transient relationships, all except for Queenie and Burrs. They find a somewhat more long-lasting three year relationship that is based mostly on sex. Think “Life in the Fast Lane” by the Eagles.

But ah….  sigh…  all good things must end. Ennui sets in and Burrs gets too rough with Queenie, so she decides to humiliate him publicly, and dump him at a party  – a Wild Party.  And there you have the basis for the play.

And what a play/ musical it is!

Written and composed by Andrew Lippa, an award- winning, Broadway- savvy artist, the music pops and sizzles, the dancing dazzles, the seedy setting shadows and surrounds, and the actors all do a masterful job in each and every role. The four main characters sing gorgeously, but so does the rest of the cast.  Many of the songs are show-stoppers, but one that particularly stood out for this theater goer was “An Old-Fashioned Love Story”, a deliciously twisted and turned lesbian love song belted out by Janine Merolla in the character of Madeleine True.

“The Wild Party” is not for the faint-hearted, nor the prudish.  It is graphically sexual, and sometimes violent. Don’t go looking for an uplift here. It is real, raw, and ragin’. It is Theater Noir at its best.

On Friday May 23, 2014, the Ritz Theatre will host an LGBT night. This is the first LGBT night for the performance of Andrew Lippa’s The Wild Party. The show begins at 8pm but they will be opening the doors to LGBT friends at 7pm for a glass of wine and meet and greet with the Director and theatre personnel. Then stay after the performance for a talk back with the cast. Use promo code “EQUALITY” to receive a discounted ticket for only $20. But you must redeem this code over the phone at 856-858-5230  or in person at the box office before the show. Tickets bought online www.ritztheatreco.org will not be able to get the EQUALITY promo code discount.