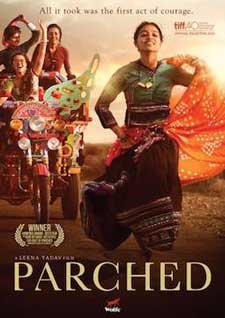 Parched is a visually beautiful film that shows every sparkle and every mote of dust in the lives of the characters. They are a chosen family that struggles and experiences joy. I spoke with the movies creator Leena Yadov about the film.

Sherri Rase – American audiences experience Indian cinema differently and the view you show us of the village elders and the reasoning they pursue to arrive at their decisions is particularly interesting. How many of India’s villages are still governed this way?

Leena Yadov – Thank you so much for your sensitive reaction to the film. There are many villages in India which are governed in similar ways. India is too large and diverse a country to make any kind of blanket statement for the whole of India. Which is why the village shown is a Fictional village. I took the liberty then to explore many themes about humanity which have always disturbed me. But the village elders body is a common phenomenon in the villages in India. And they are more or less like the keepers of law and order so to say.

Are more women and girls who live in the countryside and more remote areas pursuing the path of less-education, or are more of the rural women seeking education and resources?

LY – Again here, I cannot make a general statement for the whole of India. There are many villages where there is a huge educational drive for the girls and women. But at the same time there are villages that are so poverty stricken that they cannot be bothered by education…. the struggle for them is mere survival. But we live in a world today where information is seeping into the remotest part. Through mobile phones, Television etc. So, in that case there is a desperate attempt at control by the existing power structures who do not want the status quo disturbed. But I feel that it is inevitable. Going to schools is just one part of education and exposure.

What percentage of marriages are arranged in India? Are women in abusive situations as Champa finds herself still required to cleave to their husbands, regardless of the inhumane treatment received at the hands of a husband’s family?

LY – Arranged marriages historically had a lot of relevance in the past where the families got together to make matches of boys and girls as the sexes did not have many opportunities to meet and interact on their own. Over time, it became a tool of control and power. This system still exists in certain families and communities not just in the villages but also in the cities. Champa is an extreme case and not all girls are treated like this. Again, cannot generalize about this… but I have heard of similar circumstances occurring in much more progressive societies over the world who have just learnt to ‘hide’ things better.

Is the perception of women as “less” something that is still happening in your country? Is there still the same feeling about emigres like Naobi?

LY – Under the layer, this feeling of ‘less’ exists all over the world. That is why the film has found resonance in so many countries.

How many women did you interview to provide this highly detailed picture of village life and the struggles women still undergo in the 21st century?

LY – I did not interview… but engaged in honest conversation of genuine sharing and exchange with many women in the villages. That was just the beginning of the process for me. Then as I came back to Mumbai and started writing, I realized that similar things were happening in my backyard right here in the city. The characters and stories got more layered by that realization. And then I sent my script to friends across the world and wrote back more stories about women they knew who went through similar circumstances. So, the heart and soul of the stories grew and got more layered even though they were so rooted in the rural setting where my exploration began.

Thank you for the message of hope for women as well as the insight that while our cultures may be different, many of our struggles are the same.

LY – Thank you for your warm reception of the film. It was a pleasure!

Parched from Wolfe Video on DVD / VOD, across all digital platforms including iTunes, Vimeo On Demand, and www.WolfeOnDemand.com , and on DVD via Wolfe Video and many major retailers. Read our review. A preview of the film is available on youTube at www.youtube.com/watch?v=P7hYAvhUIiE

LGBTQs are changing the world in politics in the Garden State