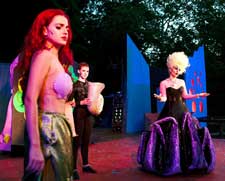 More than 25 years after The Little Mermaid  became a Disney princess icon, she joins the likes of The Lion King on stage. Whereas, the Broadway production received a mixed reception from critics, Director Louis Palena tackles the challenges (of which there are many) of bringing the story of Oceanic princess, Ariel, to life with charm and dazzle.

This expanded edition of The Little Mermaid  isn’t only a scripted improvement of the ’89 film version – in the song and dance shoes of the Open Air players; the underwater world of Ariel and the Triton family is reborn with a new life that is faithful, sincere, and vibrant. 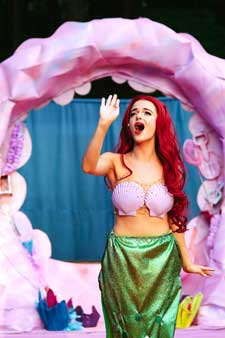 Stepping into the iconic role, Anastasia Zeiler skates to new heights as Ariel, filling our heroine with uninhibited fascination, fortified by a voice who’s “Part of Your World” ballad brings an earned tear to the eye. Zeiler does not mimic Jodi Benson’s Ariel; rather she unearths new layers in the character with the subtleties and star power of her own voice. As the iconic crooner crab, Sebastion, Tim Chastain is a high energy, endearing delight whose comic expressions speak volumes above his sparkly red costume. Not only is Prince Eric’s backstory expanded – detailing his desire to abdicate the thrown he is to inherit and openly sail the seas of water and of love – Joey Maggio is more than up to the task of defining his character with a sheer sense of adventure and faithful devotion. In this expanded stage musical, Prince Eric is notably unconcerned with inheritance or looks, and Maggio’s tenderer sensibilities, combined with a confident tenor, institute an understated believability in his character.

Michael Moeller plays the God of the seas – Ariel’s father – King Triton. Moeller is suited perfectly for the role, bringing equal bombast and warmth to the larger-than-life Triton, and sings in soothing bass. Jennifer Fischer is a vocal revelation as the evil sea witch, Ursula. Fischer holds onto high notes longer than seemingly humanly possible as the octopus enchantress, establishing Ursula’s meagerly plotted character as a vociferous rival to the seas. Jordan Brennan and Julianna Zannikos play Scuttle and Flounder, respectively, and take turns stopping the show. As Scuttle, Brennan’s comic birdbrain performance and tap dance leadership are dizzyingly fun. As Flounder, Zannikos skates in during verse two of “She’s In Love” and proceeds to take lead of the number with a powerhouse voice.

Under the direction of Louis Palena, every member of the large cast is seen in cleverly staged group numbers. “Under the Sea” is a non-stop parade of bright colors, whimsical aquatic animal costumes, choreographed to the movements of a restless Ocean. “Kiss the Girl” is equally well conceived as both intimate romance and group number fun. The pop art and neon lit set, complete with the bow of a ship and sculpted boulders as moving parts, proves to be a complimentary design for the scenes on land as well as under the sea. Jordan Brennan’s costume design is the Open Air Theatre’s imaginative best so far this season – dynamic choices pay homage to the character’s iconic looks, while instilling the show with cool spectacle.

Overall, The Little Mermaid  continues Open Air Theatre’s solid summer track record of high quality theater. This stage adaptation of the film is both expansion and improvement of the original version. Director Louis Palena and Producer Ginny Brennan have mounted another success at Washington’s Crossing State Park that is family-friendly and perfect for Disney nostalgia seekers in search of fun summer theater. See it before it sails away!

Cirque du Soleil – Toruk is over the top