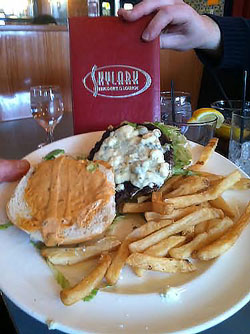 I went to bed on 8.1.12 with a heavy heart. A fear and sadness I had not felt in a while. I had spent much time that evening reading blogs and comments about ‘freedom of speech’ and how people were viewing the appreciation day at Chick-Fil-A.

I realize as a fiction author, I spend much of my time writing characters that have opposing views than mine and getting into their head is a wonderful challenge as a writer. But reading a Facebook posting of a lesbian friend who was disheartened by her own friends actions on that day and then their comments to console/justify/rectify the why and how was very saddening for me. So many are quick to say there was no discrimination going on in this particular instance, but if you are not in the category feeling that discrimination – you simply cannot see it.

I saw a news article with a photo of an African-American man saying that “protests are the new of form of persecution against Christians”. Truly? New form? Does he not know the history that has gone before him? I was born at the end of the 1960s, but can only imagine this division in our country we feel now was greatly exacerbated than. Only you knew when you passed a black person on the street. You knew when you said something hateful who it was aimed against. In today’s world, you don’t always know what co-worker, store clerk, Facebook friend you could be offending with remarks you make.

So many US females being very vocal with opinions on what is happening in our country. Thank goodness there were woman 100 years ago willing to stand up for their rights and then another movement in the 60s. Had it not been for those brave pioneers, woman of today would probably not even be given the chance to be heard on any issues happening.

It is 2012 and a New Jersey Bed & Breakfast owner is lashing out at a lesbian mother stating that AIDS is God’s attack on gays. Yes, we heard that in the 80s, but still? I suppose she hasn’t seen the news reports of the rising AIDS cases among straight senior citizens.

For me, yesterday was a day about hate – not freedom of speech. A day of hate without people getting facts. Speaking how they are supporting a business owner without knowing everything. I realize many are against gay marriage, but there is more behind this story and I’ll even give Mr. Cathy the benefit of the doubt and say perhaps he doesn’t know. When you make a donation to organizations, you really should investigate what that organization stands for. Over $5 million in donations have been made by this group to organizations that advocate discrimination against homosexuals. Not just “we don’t believe they should marry”. Here is a list of others: criminalize them for being gay, calling them pedophiles, remove their rights to serve in the military, removing sexual orientation from employer handbooks so that they can be fired from jobs, denying gay adoption and the rights of gay parents to see their children…this is just a few.

Is that what people were standing in line for? To demoralize all the homosexuals in our country? Because if you fall in that group – that is what you saw.

If you arm yourself with facts and still stand in your truth, I’m in full respect of that. Because then you do know what you are standing in line for, and taking photos with your family to place on the internet as if August 1st in front of a chain restaurant is a day to be remembered for all. For the record: it is not a day I wish to remember. Every single person in that line has a right to their own beliefs as does the store owners and all involved. But why does our beliefs supersede the rights of another human being? People can give every reason they want as to why they stood in line. That boycotts are wrong. That store owners have rights. That they wanted to take place in a huge historical movement. But no matter the reason you say, the underlying theme is each person standing there believed their rights are more important than others.

I know many will be amazed, but I don’t agree with every single thing going in the equality movement. I don’t think mayors have a right to tell someone they can not run a business in their town. I would hate for a gay, black, Jewish, Muslim, (insert anything you wish here) business to be told they couldn’t attempt to achieve the American dream. I don’t agree when gays decide to do a ‘kiss-in’ as if that will solve some sort of problem.

But this America seems to be changing all the time and it’s that division that kept me awake in my bed on August 1st. Sometimes, I think I’m lucky because I live in the Northeast – yet I’ve always talked of going back to Texas to be close to my family. But the images I saw of the lines of people waiting in 3-digit heat made me ponder that decision. The persistent voices attempting to get people to understand them on Facebook – never knowing the pain those words cause to people they obviously care for (or they would not be ‘friends’ on that social media site). And I don’t simply mean people in the LGBT community. I mean their families. Parents. Siblings. These are all faces you know and supposedly love.

I know it will be a long time before we see equality for all in the USA. People will say that the president of Chick-fil-A has a ‘right’ to do and say what he does – but they think nothing of the rights of so many Americans that simply do not exist. That a greatly respected woman can pass who inspired a nation as the first American female to go into space, yet her partner of 27 years gets nothing of her benefits once gone. They never even could file federal taxes together. 27 years together is a lifetime in the world we live in of constant divorce in ‘sanctified male/female’ marriages. (Look at your friends. How many have stayed together for the long haul?)

I know I will lose friends and followers over my postings. I’ve already seen it happen as people first discovered me because of my autism awareness work I do. And once they see I’m also about diversity and equality for LGBT, they quickly removed themselves from my Facebook author page or twitter feed. But I’m fine with that. It’s more important to stand up for what I believe is right. Notice I’ve not discussed religion. Equality is not about religion, though I am a Christian for those that wonder.

And as my sister so lovingly said on Facebook on 8.1.12 – my God loves everyone.

Author Gregory G. Allen can be contacted via his blog at www.gregory-g-allen.blogspot.com.

I went to bed on 8.1.12 with a heavy heart. A fear and sadness I had not felt in a while. I had spent much time that evening reading blogs and comments about ‘freedom of speech’ and how people were viewing the appreciation day at Chick-Fil-A.