Most times I hold off until the end of my reviews before I recommend whether you should see a show or not. This time can’t wait. Buy tickets for The Honeymooners, the new musical making its world premiere at the Paper Mill Playhouse in Millburn, and prepare to have the time of your life!

The Honeymooners gives the audience a new view of these working class Brooklynites while paying tribute to the original 1950’s show. Authors Dusty Kay and Bill Nuss, composer Stephen Weiner, and lyricist Peter Mills have crafted a show with the feel of the original TV version. Kay and Nuss have wisely kept familiar catchphrases from the original show in their script, even recreating a classic scene with Ralph and Norton from one episode. Weiner and Mills’ score, blending seamlessly with the book, captures the musical comedy styles of the era in a fresh, witty way.

Bus driver Ralph Kramden and his best friend, sewer worker Ed Norton, have entered a jingle-writing contest. To their delight and the surprise of their long-suffering wives Alice and Trixie, they win first prize and are hired by a Madison Avenue ad agency. Ralph and Norton’s new-found success, however, pits them against the tricks of the advertising trade, causing friction between the two friends. Trixie’s desire to go back to show business forces her to work with an old flame, putting a strain on the Nortons’ marriage. Cynical Alice has her hands full keeping Ralph from letting his flights of fancy run away with him. Things come to a head when Ralph and Norton’s new jingle is ready to debut on a nationally broadcast TV show. Will the four friends find themselves reaching the moon — or landing splat on earth? 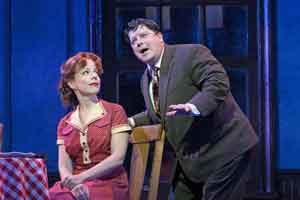 The four stars are brilliantly cast. Tony-winner Michael McGrath takes the movements and expressions of Jackie Gleason and adds his own talent to create a memorable turn as Ralph Kramden, the beaten-down but still hopeful driver for the Gotham Bus Company. Goofy sewer worker Ed Norton, created by Art Carney, appears in all his daffy, good-natured innocence in the performance of Michael Mastro. It is not difficult to believe from the start that these two have been best friends for years, and their second-act number “I’ll Miss the Guy” proves this.

The two female leads are equally excellent. The brilliantly talented Leslie Kritzer’s world-weary Alice Kramden, originally portrayed by Audrey Meadows, is deeply in love with her man despite all they’ve been through. Yet she is tough enough to stand toe-to-toe with him and hilariously win their arguments, as shown in the duets “To the Moon” and “Eighty-eight Keys”. Kritzer stops the show with a bluesy second-act ballad, “A Woman’s Work”. Her counterpart Laura Bell Bundy, as gorgeous ex-burlesque dancer Trixie Norton, ably displays her talents in “Undeniable”, a duet with Norton; “Keepin’ It Warm”, her nightclub number; and “The Faciamatta Commercial”, a delicious send-up of holiday-themed TV ads.

Lewis Cleale is a perfect musical villain as Bryce Bennett, the two-faced creative director at the ad agency, and his number “You’re One of Our Kind” is a slimy delight. Strong support is also given by Lewis J Stadlen as Old Man Faciamatta, the ad agency’s client, utilizing Italian stereotypes to create a deadly serious yet funny character, and the members of the ensemble, who went above and beyond in multiple parts throughout the show.

Director John Rando displays the talents that have won him Tony and Obie Awards in past seasons, skillfully guiding his cast through a tale of ordinary guys and gals getting their big breaks in the nostalgically simpler 1950’s. Rando is joined by the equally talented Emmy Award-winning choreographer Joshua Bergass, putting the cast through their paces in several brilliant production numbers. Chief among these are “Infine la Felicità”, where the admen make a pitch to a client; “The Madison Avenue Line”, where Ralph shares his good fortune with the other bus drivers; and “The Faciamatta Commercial”.

The Paper Mill Playhouse has started off its 2017-2018 season with a delightful, entertaining, joyous musical that will delight all who are lucky enough to see it. The Honeymooners is a winner, so get your tickets before they’re sold out!

The Honeymooners is presented by the Paper Mill Playhouse in Millburn through October 29th. For tickets and information, visit papermill.org.

“The Hombres” explores the meanings of masculinity