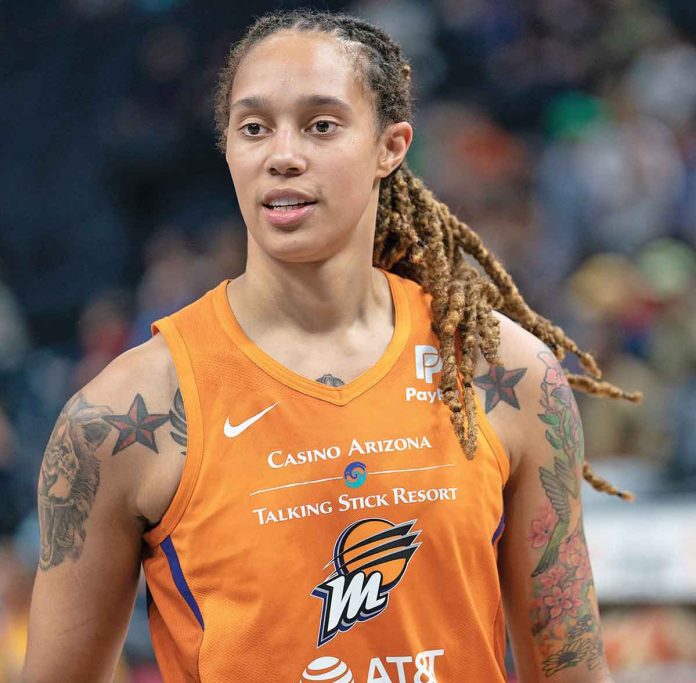 WNBA All-Star Brittney Griner was arrested a week before Russia invaded Ukraine. On February 17, the Russian Federal Customs Service detained Griner at Sheremetyevo International Airport near Moscow for allegedly transporting cannabis-derived vape cartridges in her luggage, and was charged with drug smuggling. Griner said she had no recollection of packing the cartridges and told the judge, “I made an honest mistake, and I hope that in your ruling that it doesn’t end my life here.” As a strategy, Grinner pleaded guilty to the charges to expedite her trial, hoping it would open dialogue about a possible prisoner exchange and it’d be her get-out-of-jail card. Also, a guilty plea might gift Griner a lesser sentence and avoid retribution from prison guards while detained. Griner’s attorneys have filed an appeal for her nine-year sentence as she serves time in a “gulag-like labor camp.” Tragically, Brittany has become a geopolitical pawn for both Russia and the U.S., highlighting Putin’s ruthlessness and America’s hypocrisy. And, her problems are compounded by being a Black queer woman.

Why is Brittany in Russia?

Many have questioned why Griner was in Russia in the first place. But the answer is simple: the U.S.’s persistent and systemic gender pay gap affects women in every profession. Griner being in a Russian prison is a direct consequence of the gender-pay disparity, even in professional sports.

Since 2016, Griner has played for the now suspended elite Russian oligarch-funded UMMC Ekaterinburg team. The huge gender salary gap between the WNBA and NBA players is stark, humiliating, and insulting, forcing female players to compete overseas during the offseason. Griner is not alone in leaving the states to augment her base salary. During the offseason, WNBA players flock to the opportunity to play in Europe, earning them four to five times their U.S. salaries, and they receive top-notch treatment. “UMMC Ekaterinburg provided each American player with a personal driver in addition to other amenities. The restaurants are good, the team pays well and takes care of every detail — chartering flights to away games, delivering bottled water to their apartments — the arena is always filled with locals,” ESPN reported.

The annual minimum base salary for an NBA player with only one year of experience is approximately $1.637 million. Currently, WNBA players receive a yearly minimum base salary of $60,000 and a maximum of $228,000. Griner is one of the best basketball players in the world. Her base salary for the WNBA 2021-2022 season was $221,450. However, during the offseason with the UMMC Ekaterinburg team, Griner makes between $1 million-$1.5 million per year.

The revenue disparity highlights the following: the lack of money poured into women’s basketball, unlike in Russia and other European countries; female players’ dependence on supplemental work rather than compensating these professional athletes appropriately; and how nothing is still being done to immediately address the pay inequity in light of Griner’s predicament.

Griner is no stranger to Russian basketball enthusiasts. She’s loved in Russia as she is here in the states. But the deafening silence from the UMMC Ekaterinburg team is hypocritically revealing on many fronts. And Griner’s intersectional identities place Griner in the wrong place at the right time during Putin’s war against Ukraine.

Griner being an out lesbian is no secret here or in Russia. Russia’s notoriously anti-LGBTQ laws and attitudes are no secret, too. The UMMC, however, has been successfully able to insulate and protect its queer players. And, the UMMC has not stepped up on Griner’s behalf. Some critics contest that Russia’s anti-queer propaganda laws are now being used to weaponize and harass LGBTQ people, activists, and organizations to deflect attention from the war. Feminist and LGBTQ+ activist Alla Chikinda told ESPN, “This is being done so that people will think less about what is happening now in Ukraine and in Russia. It is a very clever distraction maneuver.” Other critics of the UMMC’s silence state Griner’s utility to the team expired the day she was arrested.

However, where’s the LGBTQ support for Brittany Griner in the states? Many in the LGBTQ black community have expressed dismay at the deafening silence from the larger LGBTQ+ community across the country. They wonder if professional soccer player Megan Rapinoe was in a Russian prison, would there be a louder and more robust outcry from white queers and organizations like HRC, GLAD, and the National LGBTQ Task Force, to name a few, to bring Rapinoe home. The ongoing effort, however, to bring Griner home has mainly come from African American women. An intersectional and intergenerational group of 1,200 prominent Black women have asked in a letter to President Biden and Vice President Kamala Harris to “make a deal” to bring Brittney Griner home.

LGBTQ people in the U.S. and Russia are marginalized differently. While Americans can look at Russia’s draconian laws and attitudes toward its LGBTQ citizens, America isn’t looking so good these days. Aside from Florida’s “Don’t Say Gay Law” passed this year, anti-LGBTQ discrimination in the U.S. has taken a hard-right political turn since Trump. With Roe v Wade overturned this year, many of us are disheartened and worried about what will happen to the goals of reproductive justice, marriage equality, our right to same-gender intimacy, and the fight to combat over 300 anti-LGBTQ+ legislation bills in 28 states so far this year.

Russia likes to exploit tensions of race and racism in America, especially when it can expose America’s hypocrisy as a paragon of democracy on the world stage. It’s clear that Brittany is wrongly detained in Russia. However, regarding the number of wrongful convictions, the U.S. leads all nations. The U.S. incarcerates Black and brown people at five times the rate of whites. Over 2400 people have been exonerated in the United States since 1989.

Who wins the get-out-of-jail card?

Rev. Al Sharpton has asked Biden to arrange for him and a group of faith leaders to meet with Grinner. Former NBA player Dennis Rodman said he was going to get her. Their hopes have not panned out. Griner, however, is not the only American who’s run afoul of Russia’s strict drug laws. Last year, Maryland history teacher Marc Vogel, 60, was sentenced to 14 years for entering with medical marijuana to treat chronic pain. In 2018, former Marine Paul Whelan, 52, was sentenced to 16 years on suspicion of spying, and there are others. Is Brittany a good political bargaining chip? Biden needs the black vote for re-election and must uphold his promise to black America. But what will it do for our fraught race relations here?

Moreover, a prisoner swap might encourage more hostage-taking. With no trade, Griner might languish in a Russian prison. Griner’s imprisonment has highlighted Russia’s and America’s ongoing power struggle. Also, her marginalized intersectional identities in America –race, class, gender, and sexuality — have highlighted the reason why she’s over there.