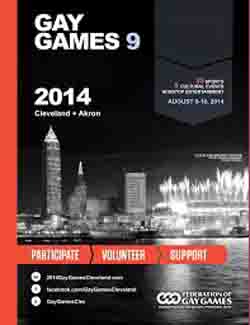 Screen comeback, being a gay icon, and her own guilt trip:

Barbra Streisand takes center stage, but she’s not busting out “The Way We Were.” Not today, anyway.

The legend is promoting her first major film in 16 years at the Four Seasons Los Angeles. Her hair is perfectly coiffed and— dressed in her usual all-black attire— she’s got the off-the-shoulder look going on.

Barbra Streisand talked about what she thinks of being a gay icon, and how she’s managed to stay successful for nearly six decades. Photo courtesy of Paramount Pictures.

Not long into the interview, a makeup artist waiting in the wings pats any remnants of forehead sweat. You don’t let a legend perspire— and Barbra Streisand is the epitome of an American treasure: a consummate singer with a timeless mezzo- soprano; an Emmy, Oscar and Grammy award winner; and the woman who stole hearts in A Star is Born. To us, a gay icon.

Streisand, along with Rogen and Fletcher, sat down to chat about the reason she finally gave in (thank her own gay son for that), what she thinks of being a gay icon, and how she’s managed to stay successful for nearly six decades.

What was it like meeting each other for the first time?

Barbra Streisand: Seth sussed me out. He called people.

Seth Rogen: And she checked out. This Barbra Streisand lady checked out. So I thought I’d give her a shot. (Laughs)

Barbra Streisand with Seth Rogan in the movie Guilt Trip. He says the movie was “like me trying to explain things to her about modern times and her trying to feed me shit I don’t want to eat.” All photos courtesy of Paramount Pictures.

who to call. I don’t know any of those people from his movies, so what was I gonna do? No, I thought he was adorable.

SR: The way we talk in real life is not entirely different than our rapport in the movie. It’s a lot of me trying to explain things to her about modern times and her trying to feed me shit I don’t want to eat.

SR: She had an iPhone before me. I was like, “I gotta get myself one of these. If Barbra can work an iPhone, it’s gotta be fun.”

SR: I showed her that she did! I change her clocks during daylight savings and all that stuff.

Because Seth is such a huge gay icon.

SR: (Sarcastically) I’m a gay icon? Do gay people like Barbra, too? I didn’t know that.

Barbra, how do you feel about the label of “gay icon”? And do you think your own son, Jason Gould, thinks of you as one?

e sees me as his mother who touches his hair too much. No, I love being an icon to anybody. Equal rights, you know!

What did your gay friends think when you told them you were working with Barbra?

Anne Fletcher: Everyone in my life is gay, but I have one best friend who has been obsessed with her since he was a child. His entire childhood was saved because of Barbra— with her music and her movies. His mom had just died four or five years ago, so for him to meet her on the movie— and her and I having such a relationship— was just full circle.

Barbra, how much contact did you and Jason have when you were considering the role?

BS: He actually was very important in my decision to make the movie. He was recovering from back surgery, so he was in bed for a few days after, and I brought the script over and we read it out loud. It was interesting, actually. His father was in the room, too. Isn’t that funny? We were both coddling our son, so he became the audience and Jason was reading the parts with me and he said, “I think you should do it, Mom.” I really trust his integrity and his opinion. He has great taste in whatever he chooses to do. And he clinched the deal.

AF: I was with you all over the world, but I love that Jason just one night says, “Yes, Mom, do it.” (I said that) for a whole year!

What about reading it with your son sealed the deal?

BS: Mothers develop guilt trips. I feel guilty as a parent that I couldn’t pick up my son every day from school and bake him cookies. I know that feeling. I know that feeling a lot. Having a famous parent is an odd thing. I thought it was interesting to investigate trying to be my son’s friend versus a mother.

It was a true story. It’s (writer) Dan (Fogelman) and his mother. She was a fan of mine, and Dan wrote this lovely script. It just felt like it was meant to be. Meant for me to come back to work in a starring role. It was time to challenge myself again.

Of course, I made it very difficult for them to hire me because I kept wanting an out: “I really don’t wanna schlep to Paramount. It’s two hours each way, so would you, like, rent a warehouse and build the sets in the Valley no more than 45 minutes from my house?” They said yes.

BS: I said to Anne, “Would you make the movie without me?” And she said no. And I felt bad! Another guilt trip, right?

SR: I was open to Shirley MacLaine. (Laughs) No, it’s not true. I only would’ve done it if Barbra was doing it.

BS: It was great to feel wanted.

Who is another gay icon you want to work with, Anne?

AF: I don’t really like the “gay icons,” by the way. I don’t really respond to them very well. I think Barbra is so grounded in many different things, but there’s some of them— I’m really insulting gay sensibility. (Laughs) But Liza Minnelli. I do love Liza.

What was Barbra like? What surprised you most about her?

AF: We became friends instantly. She’s easygoing, funny, kind, strong and knows who she is. She’s unbelievably awesome. She’d tell me some of the greatest, most personable stories that happened in her life that I can’t remember one iota of. My best friend’s a little pissed about that. (Laughs)

I imagine directing a legend like Barbra Streisand would be intimidating. Was it? Did she call the shots?

AF: It’s not intimidating. She comes to work as an actor, as an artist, and she’s been doing it for so long that all the pieces fall back into place exactly how they were. We’re all there for the common good, so she would come to work as any other actor. She’s a legend, so that’s a little different. But it was never intimidating, because she’s just so genuine. She had my back, and the support I had from her was extraordinary.

So no diva moments?

AF: Never. I know we’ve all heard the stories about her endlessly throughout all these years, but I can’t say whether they’re true or false. I just know from my experience I had an unbelievable experience with her, and I would do it again. She works harder than anyone. And her brain never shuts off. That’s the only thing I would complain about! Like, “Please stop thinking for just five minutes— because I’m tired.” (Laughs)

Even if people think of her as a diva, this role really takes you out of that mindset. You never think of Barbra Streisand, “the diva.”

BS: God, what is my secret?

SR: Sitting next to me helps.

BS: (Laughs) He is so funny. If you knew all my self-doubt, my god—I don’t know. Maybe I’m slightly childish.

AF: Your spirit is youthful.

BS: Yeah. I kind of like the child part of me.

What was harder for you, Barbra: the drama or the comedy elements of the film?

BS: Eating steak! That was the hardest thing, I think. But no, they’re both the same. I don’t think there’s a distinction between how you play drama or comedy, if it’s based in truth.

AF: This woman may not like steak, but she’s a foodie. You’ve never met a foodie in your whole life until you’ve been with Barbra Streisand. This woman loves food more than anything— and she will eat it! She’s a bottomless pit. We had many discussions about that steak scene. From Barbra’s side it was, “Does it have to be that? It seems a little gross.”

Anne, did Barbra ever break into song?

AF: Never. Barbra will not sing. I sang an awful lot to her. But she will not sing. There’s a thing that she did in the movie that we cut out where she’d go, “Hmm, hmm, hmm.” She would do rhythmic things that she does with her voice that only Barbra can do— and I would take that as singing. But she would never do it. Never. She’s so rude. (Laughs) Give us a free concert, Barbra. She’s like, “Pay for it!”

You can sing, act, produce, write and direct. What can’t you do well?

BS: I can’t cook at all. I mean, I would not know how to make coffee. I took cooking classes. I know how to make chocolate soufflé. Just ask me if I want to make it. I’d rather have somebody else make the chocolate soufflé—and I eat it. When I tried to cook, put it this way: It was never appetizing to eat. And the hands! So filthy with the stuff. And then cleaning up. No, I don’t like that part.

Barbra, you must see a lot of scripts, right?

BS: I don’t. You see, everybody thinks like you. Meanwhile, I go, “Where are the scripts?” (Laughs) It’s not the same as when I last made a film. They’re not interested in love stories. It’s a different time. I don’t like it as much.

What’s the secret to your success?

BS: Less is more. Maybe that keeps a little mystery or something.

What do you want audiences to take away from the film?

BS: I want them to be moved and I want them to see themselves in the movie. I want them to get closer to their children. A lot of things. It’s a transformative kind of movie. They start at one point and are both kind of tragically alone, not finding a mate, and then at the end there are many more possibilities. Horizons open. He took me out of my shell. It’s about love. I always say it’s a different kind of love story.

SR: Which to me sounds gross.

BS: See where your mind goes? Always to the sexual.

SR: Right in the gutter.

Chris Azzopardi is the editor of Q Syndicate, the international LGBT wire service. Reach him via his website at www.chris-azzopardi.com

Screen comeback, being a gay icon, and her own guilt trip:

Barbra Streisand takes center stage, but she’s not busting out “The Way We Were.” Not today, anyway.

The legend is promoting her first major film in 16 years at the Four Seasons Los Angeles. Her hair is perfectly coiffed and— dressed in her usual all-black attire— she’s got the off-the-shoulder look going on.

Love and understanding: A conversation with Cher