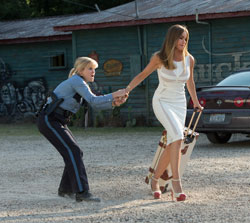 The Boy Scouts of America (BSA) and the Black Church are rightly lauded for molding young black men into adult leaders. BSA troops have produced distinguished African American scouts like retired four- star general Colin Powell, six-time NBA champion Michael Jordan, and Heisman Trophy winner Herschel Walker. African American participation in the Boy Scout movement dates back to 1911, and its impact has not only forced the integration of young black males into the organization, but also continues to address many of the challenges these young males confront today.

With young African American males (particularly those in urban enclaves) at much higher risks for incarceration, gang violence, unemployment, fatherlessness, and substance abuse, the BSA has been a source of constant and consistent strong positive male figures for these young black boys.

Like many BSA troops, African American troops are often strongly affiliated with community black churches. These churches not only hold homophobic views, but also hold a tight-fisted hand on their non gender conforming males.

The BSA’s position on GBTQ scouts is unquestionably discriminatory, and its hesitancy to swiftly remove its ban dishonors the organization’s goal and philosophy, “to prepare young people to make ethical and moral choices over their lifetimes by instilling in them the values of the Scout Oath and Law.”

This means that GBTQ black youths cannot catch the lifeline that the BSA provides their straight brethren due to the homophobia of the church and the BSA. It’s no wonder these youths have higher incidents of homelessness.

The BSA’s national office is housed in Texas, the heart of the Bible Belt, and that reflects the religiously conservative influence on the organization’s policies.

Although the BSA is a civic organization that has local chapters in public schools, a large number of them are equally affiliated with religious institutions. Those religious groups have a disproportionate influence on the organization.

Most of these religious institutions interpret and impose both the Scout Oath and Scout Law from their conservative theological perspective and the Black Church is not alone in doing so. The Church of the Latter Day Saints, for example, has a huge influence on the BSA because the church mandates that all male youths join the Boy Scouts.

“With mutual exaltation of God and country and a shared aim of nurturing ‘morally straight’ men with leadership skills and a service ethic, the Mormons and the Boy Scouts seem made for each other, as entwined as a square knot. And in an unusual partnership dating to 1913, the Mormon Church has embraced scouting wholesale, giving it a central role in preparing male youths for their two-year missionary stints and adulthood as lay priests” New York Times reporter Erik Eckholm wrote in his recent article “As Partner, Mormons and Scouts Turn Boys into Men.”

The basis for discrimination against gay scouts and gay scout leaders pivots around two beliefs: the Judeo-Christian tenets about homosexuality and the myth that there is an inherent correlation between male homosexuality and pedophilia. Although these beliefs have been successfully refuted they are strategically upheld to maintain its ban.

The words “morally straight” and “clean” are what have fueled the BSA’s homophobic stance and consequently have given rise to both its misinterpretation and misuse of the group’s own guidelines.

While “morally straight” and “clean” have everything to so with being a scout, they have nothing to do with a scout’s sexual orientation. The original interpretation of both words are about virtue, readiness, and open mindedness in the context of human service, and a scout’s commitment to teamwork, honesty, respect for others, and community service.

The truth that needs to be told is that the BSA’s is fighting itself, and needs to come out of the closet about its founder. Perhaps that would dispel the dispute about gay scouts.

Jeal further states that in Baden-Powell’s diaries and correspondences, Baden-Powell wrote frequently about his “enjoyment at watching young men swim naked; enjoy nude men; (and) expressed disdain for female nudity.” Also, Baden-Powell had an “extremely close, decades-long friendship” with Kenneth McLaren, “with whom he served in the British military and always made sure he bunked.”

However, if both the Black Church and BSA goals are to continue to nurture the talents and gifts of all its young males, then they must ask themselves to what degree does their stance on homophobia hinders their goal?

Author Rev. Irene Monroe may be reached via email at revimonroe@me.com.

The Boy Scouts of America (BSA) and the Black Church are rightly lauded for molding young black men into adult leaders. BSA troops have produced distinguished African American scouts like retired four- star general Colin Powell, six-time NBA champion Michael Jordan, and Heisman Trophy winner Herschel Walker. African American participation in the Boy Scout movement dates back to 1911, and its impact has not only forced the integration of young black males into the organization, but also continues to address many of the challenges these young males confront today.

Who puts what where?

The Matthew Shepard we don’t know