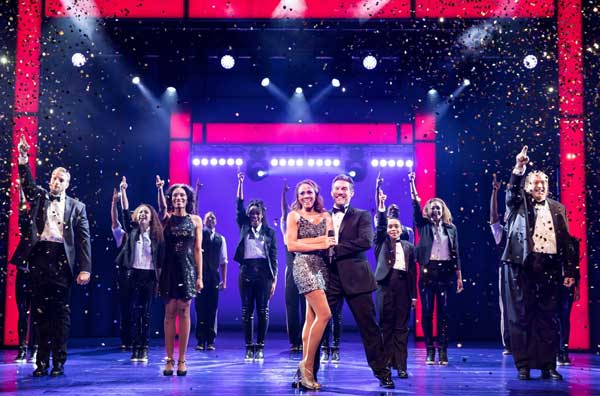 There’s no doubt about it – Deborah Cox is a dynamic, Grammy-award winning singer with surprising acting chops.  Paper Mill Playhouse has provided a dazzling showcase for her talents with The Bodyguard, based on the movie of the same name, making its United States premiere and kicking off its national tour.

The Bodyguard, originally staged in London’s West End, is the story of two strong-willed people, both skilled professionals in their individual fields. Rachel Marron is a spoiled rock diva, accustomed to having her every whim immediately fulfilled, running roughshod over her manager, her security chief, her publicist, and Nicki, her sister/personal assistant.  Rachel’s manager, concerned over getting threatening letters from a stalker which he has been hiding from the star, hires Frank Farmer, former Secret Service agent turned professional bodyguard. Farmer’s stolid, no-nonsense attitude clashes with Rachel’s willful nature, with the diva insistent that she will do as she pleases despite his wishes. Farmer’s explanation to her about what his job entails, and an encounter with the stalker during a club appearance, has a sobering effect on Rachel. Farmer and Rachel start a love affair, but Farmer ends it, realizing it is jeopardizing his mission. Tension builds as the stalker gains access to Rachel’s dressing rooms and mansion, and invades a supposedly “safe” house, until events rush to an electrifying showdown at the Academy Awards.

Playwright Alexander Dinilaris adapted the movie’s original screenplay for the stage. Instead of having a new score created, he successfully incorporates pop hits of the late eighties and early nineties (including the movie’s original score) not only as Rachel’s performance numbers but also as intelligently chosen songs furthering the show’s plot – something not easily achieved in the musical theatre. Thea Sharrock, the director, has a keen sense of pacing, skillfully guiding the cast through both high-energy production numbers and calmer yet emotionally forceful book scenes, creating a unified show from its many parts. As for the choreography of Karen Bruce, it captures the adrenaline-fueled energy of rock/pop concerts, performed to razor-sharp precision by her ensemble.

Deborah Cox tackles the role of Rachel Marron, proving her renowned vocal talents while displaying unexpected dramatic skills that place her a step above other singers who have tried their hand at acting. Watching Ms. Cox, one feels not like a star is being born; it’s more like a star is revealing her full splendor to the audience. She is ably partnered by Judson Mills’ portrayal of the title role, bodyguard Frank Farmer. I especially single out his performance of one of the most well-known songs in the score, Dolly Parton’s “I Will Always Love You.” High praise goes to three supporting actors as well: Jasmin Richardson, playing Rachel’s sister Nicki, who instills fresh power into the anthemic “Saving All My Love” and gives a strong portrayal of a woman who has lived her life in her sister’s shadow; Jorge Paniagua, who with few words creates a powerful, threatening, can’t-take-your-eyes-off-him presence as the stalker; and Douglas Baldeo as Rachel’s young son Fletcher, an exuberant portrayal of a boy growing up in his mother’s world of music and performance.

The Paper Mill design team has risen to the challenge of creating the world of a pop diva.  Tim Hatley’s fine set and costume designs never once appear jarring or out of place, and his imaginative use of sliding panels emerging from the proscenium’s top and sides focuses the audience’s attention just where the director needs it to be, moving us from location to location throughout the show. The contributions of lighting designer Mark Henderson and sound designer Richard Brooker provide additional levels of overall scenic excellence; and the video designs of Duncan McLean add a heightened touch to the visual and aural effects of the show’s other designers. Pay special attention at the end to the screen as the orchestra plays you out of the theatre.

If your tastes this holiday season run to the kind of big, exciting, high-energy musical that Paper Mill Playhouse can provide so well, then rush to get tickets now to see Deborah Cox in the United States premiere of The Bodyguard.

The Bodyguard is being presented by the Paper Mill Playhouse in Millburn through January 1st, 2017.  For tickets and information, visit www.papermill.org.