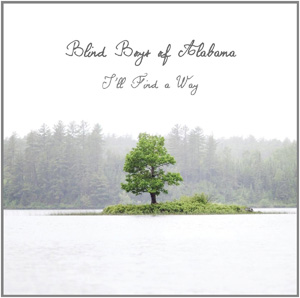 They have appeared on television, notably on “The Colbert Report” and “Tavis Smiley” in 2013, and at the White House recently. The original group met and started singing together in 1939 while they were students at the Alabama Institute for the Negro Blind in Talladega, Mississippi.

The current lineup of the group includes Ricky McKinnie, Paul Beasley, Jimmy Carter (an original member), Ben Moore and Joey Williams. Jimmy Carter, who will be 83 this year, is now the group’s leader, as he does most of the talking. He has taken over from Clarence Fountain, who had been the leader. Fountain occasionally joins the group, but because of ill health no longer tours. He does join the group in their latest recording, “I’ll Find a Way,” which was released late last year.

Justin Vernon, of Bon Iver, produced the recording. Mr. Vernon idolized the Black Boys when he was a child, and wished that someday he might work with them. Amusingly, Jimmy Carter had never heard of him before they were to work together, which attests to the Blind Boys’ openness to bring their music to young audiences.

The Blind Boys’ program consisted mainly of songs from their 2013 recording. The program book said, “The program will be announced from the stage.” And so it was. Mr. Carter did the announcing amid patter and joking from the stage. Jimmy Carter let us know early on what was expected of us when he said, “We don’t like to sing to conservative audiences. We like our audiences to make NOISE!” He then informed us that his birthday will be Tuesday, February 11, and introduced the song “Take your Burden to the Lord and Leave It There.”

Mr. Carter introduced several of the songs as from their “new record.” The songs that followed numbered “I’ll Find a Way,” “I’ve Been Searching,” and “God Put a Rainbow in the Sky.” The Blind Boys of Alabama also sang “Spirit in the Sky” and “Amazing Grace,” which they sang to the tune most of us know as The Animals’ hit, “the House of the Rising Sun.” In reality, the tune is an old folk song, “Rising Sun Blues.”

There was a prolonged standing and clapping frenzy as Mr. Carter moved throughout the audience shaking hands and allowing himself to be hugged by women while the musicians sang and vocalists played.

The group was available after the show to autograph their new CD.

Kean University has a vibrant and varied season of programming. For more information visit: www.keanstage.com/

Music to close out your Summer

Pale Waves take over the States