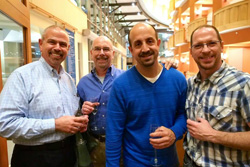 show review.
The New Jersey Premiere of The Best of Enemies at George Street Playhouse is great theatre that is well worth seeing. The show is based on the non-fiction book of the same name that chronicles the story of Durham North Carolina school desegregation.

Aisha Hinds as Ann Atwater, Don Guillory as Bill Riddick and John Bedford Lloyd as C.P. Ellis in The Best of Enemies. Photo by T. Charles Erickson
The story starts in the late 60s and moves ahead almost three decades in small short vignettes. The 95 minute play, without intermission, moves along quickly and is enthralling throughout.
The content is not at all dreary or boring in the least. It is a story about social justice and the real meaning of life. It keeps the full attention of the audience with a riveting storyline, shocking language and inspiring performances by the cast. The sarcasm and the irony in the story is so needed. It provides a welcome respite to the serious subject matter. Most interesting to me is the irony and sarcasm all flowed easily. It seemed completely natural to the characters. Once the audience got more comfortable and felt at ease to laugh at the situations presented it became more interesting to watch the vignettes. They seemed to move quicker and it was no longer just a play based on a true story.

John Bedford Lloyd as C.P. Ellis gets a “discussion” from Aisha Hinds as Ann Atwater in The Best of Enemies. Photo by T. Charles Erickson. Photo by T. Charles Erickson
Aisha Hinds performs superbly as Ann Atwater. The character has more spunk when she speaks than you will ever see in most women of the time. The contorted posture speaks volumes about who she is. She has some of the toughest dialogue too – and she never missed a beat. She plays an African-American woman that is a 60s activist of sorts in the Black community. She shows how single-minded she can be early-on. It is a key to the play.
She is – not so subtly – talked into working with those that hate her by community organizer Bill Riddick. He is from out-of-state and is in Durham because the government folks in D.C. sent him. He shows up to attempt a local solution to the desegregation problem. Riddick’s part is deftly played by Don Guillory. Riddick uses his skills and good looks to convince both Ms. Atwater and the local Ku Klux Klan leader to co-host a charette. His clever use of this word and other phrases, as well as his smiling face –even when insulted – is fun to watch and ponder. Near the beginning he must explain “what is a charette?” to Ms. Atwater and the other main protagonist C.P. Ellis. It is a nice ruse to start the process of finding a local solution.
C.P Ellis is performed by John Bedford Lloyd. He plays a most convincing KKK leader and shows an incredible range of emotions as he discovers the human condition in activist Ms. Atwater as the storyline moves along. He also discovers who his friends are, what is really important in his life and therefore who he really is in the process. His story is the story of the play – redemption.
Susan Wands plays Ellis’ wife Mary. She plays the part of the good wife trying to hold everything together for the sake of the children despite all of the many times she feels overwhelmed by the chores and the amount of time it all takes. Meanwhile, her husband is out with his KKK buds and then later on with the folks at the charette meetings and events. In the end, the family situation and city of Durham become almost one as she helps her husband discover what he really needs to know and then teach it to others.
The Best of Enemies runs through December 23 at George Street Playhouse, 9 Livingston Ave., New Brunswick, NJ 08901. Tickets are available online at www.GSPonline.org or call 732-249-7717. Coming soon to George Street Playhouse is the next award winning Broadway hit Good People starting on January 29, 2013.
show review.
The New Jersey Premiere of The Best of Enemies at George Street Playhouse is great theatre that is well worth seeing. The show is based on the non-fiction book of the same name that chronicles the story of Durham North Carolina school desegregation.

“A Most Dangerous Woman” captures theatergoers in Madison