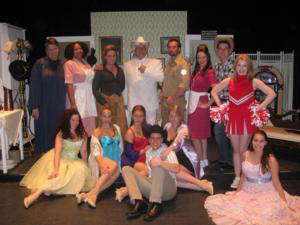 We first meet Miss Mona, the proprietress, who runs a brothel [known as a “chicken ranch”] under the watchful eye of the town sheriff, Ed Earl Dodd. Sheriff Dodd also happens to be “sweet on” Miss Mona. All is rosy until a crusading television personality, Melvin A. Thorpe, campaigns to rid the great state of Texas from what he terms moral filth. The ensuing political ramifications occupy the rest of the story.

It was a hit on Broadway in 1978, with direction and choreography by Tommy Tune, Peter Masterson, and Thommie Walsh. There was also a 1982 feature film which starred Dolly Parton and Burt Reynolds.

Madison Houck is a handsome woman with sure stage presence and a lovely voice. Matthew Kougassian, III, is a lovely hunk of man who more than filled the boots of Sheriff Ed Earl. At one point, the action in the play necessitated his shirtlessness, which was a welcome moment in the play. Matthew’s fine diction also nailed down his complex speeches with an assured regional dialect, delivered realistically in all of its colorful metaphors. He also had a fine singing voice in his one big number. Luisa A. Stewart-Fuentes had stage presence to spare, and she brought the house down with her fine singing voice. She should be the next Mama Rose in the Old Library Theatre’s next offering, “Gypsy.” The Aggie’s locker room song and dance was delivered with aplomb. Of special note was Vincent Plantamura, who tap danced his way to fame for what seemed like an eternity. Bravo, Vincent! Will Sandoval, as the Governor of Texas, worked his character like a stage veteran, as well as dancing in unison with his two partners. Katie Weigl (Angel) and Sarah Mason (Shy) were fine in their roles. (Speaking of “Gypsy,” I think we’ve also found Mama Rose’s young daughters. While we’re at it, perhaps Matthew can be Herbie …) Brian H. Eller was an idiomatic Melvin A. Thorpe.

The 180-seat theater was packed with an appreciate crowd who warmly acknowledged the fine performance.

The Old Library Theatre was started in 1967 in Fair Lawn by a handful of people who wanted to make theatre performance available to everyone. The company’s mission is to provide quality entertainment at affordable prices with talented performers of all ages, ethnicities, and stages of development. The company is in its 46th season. It is a community theater in the best sense of the word, featuring working men and women who care enough about the theater to present plays on nights and weekends.

“Last Days of Summer” is a nostalgic coming-of-age musical