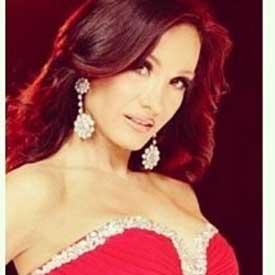 Since joining the hit Bravo show “The Real Housewives of New Jersey,” Teresa Aprea – along with her  equally gorgeous twin sister Nicole – have definitely made their mark on the show.

Whether it is introducing us to her amazing family – including husband Rino or talking about her place, Angelo’s Of Mulberry Street, in New York City’s famed Little Italy – or mixing it up with the other ladies, this Colts Neck resident is keeping it real.

Teresa spke with me about her first season on the show, how the men in her life are handling the sudden fame, and a “crazy” trip to Florida with the rest of the ladies!

Not at all, it really didn’t bother me. Nicole and I both say that any project we work on or anything we do, we always have so much fun doing it. Having cameras following us can be a little challenging, but what you see is what you get with me. It’s funny, when I decided to do the show, some people said to me “oh aren’t you concerned, everyone has skeletons in their closet”.

You know what, I don’t have any skeletons, everything is out in the open. This is what I say; we love hard, we play hard and we fight hard. Life isn’t perfect, but my family is real. We put the “fun” in dysfunction. I’m taking it one day at a time and having fun.

You were part of one of the biggest cast shake-ups since the inception of “New Jersey”. Was it hard coming in after three long-time cast members departed and having a feeling of possibly having something to “live up to”?

Not at all. We never looked at it as we were replacing anyone. Everyone is different, we are who we are and we don’t want to be anyone else. I say this with so much humility, but to know us is to love us. We have great hearts, we’re a lot of fun, we’re very charismatic and very dynamic, both Nicole and I. The way that I love people, it’s incredible; it’s kind of like you attract what you attract. We’ve been having the best reaction, the best fans, and the outpouring of love is just awesome.

You came into the show and immediately friction started with you and your sister Nicole and the other new addition to the cast, Amber Marchese. Was it hard hitting the ground running and getting into conflict with a new cast member right off the bat?

You know what, I think it was more upsetting for my sister to go through that, because she was really friends with Amber. I know Nicole’s heart, and it’s very genuine and sincere, and she really cares about her friends. The way I saw it, there was no love lost there, I never considered that girl a friend from the start anyway. She was Nicole’s friend, and they had a relationship because of [Nicole’s boyfriend] Bobby and Jim [Marchese, Amber’s husband.] To see that unravel, it was surprising, because I really didn’t think it would take the turn, especially since Amber and Nicole were really good friends. Bobby and Jim were over ten years, so it was hard to see that fall apart as well. For me though, no loss-I read those two from the start.

People absolutely are loving your hilarious husband Rino and your handsome son Giovanni. Do you think you would take the show and maybe use the platform as an opportunity to do a cookbook with some of the amazing recipes that are served at Angelo’s of Mulberry Street?

You know what, even before we did the show people have been driving Rino crazy to do a cookbook, so now more than ever we want to do it. Angelo’s always had a name for itself, but now with the show, it’s even more of a platform. We’re so blessed to have an even bigger platform to reach so many millions of people across the country now. We just need to make the time after this crazy summer to sit down with recipes, take pictures of the recipes, it really takes alot. We’re definitely going to do it though.

Signing up for a show like “The Real Housewives” essentially changes your entire life. Now that you’re close to halfway through the season, has it lived up to what you thought it would?

I have to say, it’s been so great. Not crazy in a bad way, because our lives are so hectic already with the business and the people in our lives. We’re kind of used to this whirlwind of a life already, so it’s not a drastic change. The attention is definitely different, especially to my husband and my son. We can put on sunglasses or a hat and people may not know us; my husband Rino on the other hand has a very distinct look, people just know him and they love him LOL! Every gay guy is loving my son to no end, it’s been so much fun, and it’s really been positive. The love we get when we see people in the street has been awesome!

With your first season halfway over, do you think you would sign up for a second season?

You know what Cookie, I take it one day at a time. It’s all so new for us, every episode, I may have filmed it, but it’s the first time I’m seeing it when I watch it on television. There were some really fun times, but there were also some really disgusting times, you will see a few things unravel-wait for our trip to Florida! I’m taking it one day at a time right now, and take it from there!

Summer in New Jersey means so much to different people. With the end of summer upon us, what does a true “Jersey Shore” summer mean to you?

Summer in Jersey is the three B’s – beach, bikini and Belvedere! It’s the beach, it’s cocktails, it friends, all that stuff. We all hang out down at the beach, eat tons of food, spending time with the people you love and care about.