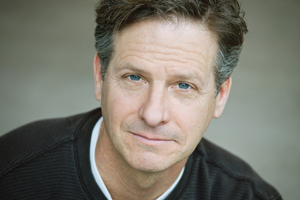 The stage is bare, save for a high stool and a small table. Upon the table is a framed photo of a boy. The boy is standing in a boat, wearing a life jacket and swim suit, holding an oar above his head, as if in victory that he mastered the craft. That photo continues to play a role in the monologue performed and written by Martin Moran titled “The Tricky Part.”

Moran has also written it as a book titled, “The Tricky Part: A boy’s story of sexual trespass, a man’s journey to forgiveness.” Indeed it is. On stage, Moran painstakingly and achingly describes his life, feelings and boyhood surroundings with startling detail. The audience is swept along by his breathtaking emotional clarity, wit, and humor recounting his growing up Catholic in a small town in Colorado. Street names, neighborhood families, teachers’ names, dates and times, help to create a vivid tale. Like a modern day Thornton Wilder, he speaks not only of his town but “Our Town,” that place idealized by the passage of time and polished by recollection in our collected memories.

The stage, brightly lit during his introduction to his boyhood, then became dim, as if seen by candlelight, when Moran starts to read from his journal, a work he tells us, was years in the making, years spent in group counseling and survivors of sexual abuse meetings.

Moran, deliberately and without pause, painstakingly described how a man, 20 years his senior, seduced him as a twelve-year-old during a sleep-over adventure away from home. This relationship lasted for Moran from age twelve to age fifteen, and along the way included how Bob, the seducer, later included the boy in a heterosexual three-way relationship. After breaking off with Bob, Moran informed us of his suicide attempts, reconciling his Catholic faith vis-à-vis his gayness, and his coping with the resulting scars of growing up too soon as a gay man.

Moran, now 53, lives with his long-time partner in New York City, where he works as an actor on Broadway and on television, when not performing “A Map of the Soul,” the omnibus title of his two plays, “The Tricky Part,” and “All the Rage.”

“The Tricky Part” was first work-shopped (according to the program notes) in 2002, then subsequent workshop productions in 2003 and 2004. “All the Rage” opened in New York City in January 2013, and was developed with support from several theater companies including Two River Theater.

“The Tricky Part,” was directed by Seth Baris. Scenic designers were Mark Wendland and Warren Karp. Lighting design was by Russell H. Champa, sound design by Leon Rothenberg, and projection design by Bart Cortright. The production was stage managed by Kate Croasdale. The production runs until November 17.

In addition to a pre-performance lecture series, Two River Theater also offers post-play discussions during the run. “Text in Context,” a new book club, will feature this play as its first offering, led by literary manager, Anika Chapin. It’s first meeting was November 10 at 5pm, led by Martin Moran. “The Tricky Part” book will be available for purchase in the lobby of the Joan and Robert Reichnitz Theater.

“My Life on a Diet”: Renée Taylor, ladies and gentlemen, and what a life she’s led!

When whiteness is mirrored back at itself

“Last Days of Summer” is a nostalgic coming-of-age musical