LGBT community is growing and taking Pride in Bloomfield

Organizers are proud of the programs offered as part of Take Pride, Bloomfield! They celebrate, educate [and] advocate. That is the motto of the Bloomfield Pride Organization. Each program is important in its own way.

Take Pride, Bloomfield! is a Bloomfield Public Library program running through the month of June. It would not be possible if not for an Incubation Grant from the New Jersey Council for the Humanities. Director of Bloomfield Public Library, Holly Belli, applied for the grant on behalf of the Bloomfield Pride group, “which was then relatively new,” she comments, “[because] incubation grants from the NJCH are meant to explore something new or new to our community.” The funding provided by the grant award made possible all kinds of programs “designed to explore the LGBTQ+ experience in Bloomfield and as part of the wider American experience.”

There are book discussions examining the transgender experience of a child. Plus they present documentary screenings portraying the experience of lesbian women of color who are unjustly accused and “fun and joyful drag queen story-time” programs. They all offer an opportunity to learn something new or to better understand.

“Equality and equal protection are so important to a free and open society,” Belli says, “and to see how far we have come. It is especially important, during the current political climate that we remember these things and realize that some fights are still before us.”

The concept of a library goes beyond books 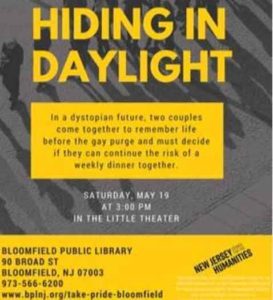 “Libraries are one of the last truly free, open, and democratic spaces left in American society,” Belli says. “The concept of a library goes beyond ‘book depository.’ Libraries are rapidly becoming places where people can get information about citizenship, housing, tax assistance, and food assistance.” And while it might come as a surprise, the biggest users of libraries are millennials. Using their library card they can get free online access to their e-books, movies, music or graphic novels. Hence libraries, such as Bloomfield Public Library, “are so much more than just books.”

In a time when funds for the arts and education, in general, are slashed left and right, it is worth pointing out that Take Pride, Bloomfield! offers a wealth of information through a variety of artistic activities. “That’s why applying for this funding was so important,” Belli offers. “Everything the library provides is free and open to the public, and we have to get very creative when we are running our non-grant-funding programming, in order to make things happen!”

“Thanks to the NJCH, we were able to approach the Bloomfield Pride group and ask them what sorts of programs they would want to see offered. They had dozens of suggestions, many of which became part of our programming lineup. There is a lot of flexibility and room for change, as opportunities present themselves, [opportunities] like Gregory G. Allen’s play, fit perfectly with everything we’ve been discussing here.”

Award-winning author, and also actor and playwright Gregory G. Allen has a strong connection to Bloomfield, New Jersey. For several years he has run the Westminster Art Center at Bloomfield College and has been an intrinsic part of 4th Wall Theatre, Bloomfield’s professional theater company.

As part of Take Pride, Bloomfield! Allen’s new play will have its New Jersey premier as a reading. Hiding in Daylight is a one-act play telling the story of two couples who’re trying to survive in a dystopian future, after the “gay purge.” The writing is superb, as Allen’s writing always is; the story, eye opening, reminding of stories such as The Handmaid’s Tale or 1984. With each word, with each sentence, the audience gets to learn more about the characters and become more aware of the story unfolding in front of their eyes.

Commenting on the source of inspiration for his play, Allen says, “I honestly thought my life was going along great since marriage equality took place. Then, [during] the past two years, there has been a scary shift, a shift in how our community is viewed.” He mentions the rise in hate crimes, in real life, people turning against those whom they perceive as “different.” Allen has spent his entire life preaching, in one way or another, that being “different” is okay. Now, as a society, we’re being told that it is not. “That kills my soul. So, I did what I usually do and turned to writing to get my point across,” he said.

Using the Hiding in Daylight story to create a dystopian future where gay individuals are “carted away” frightens the playwright, but this kind of fictional story could become a reality, if we’re not careful. “I decided to allow my characters to talk about what’s happening today and [could help create such a scenario] in the future,” he mentions. “I just knew I needed to get it out there now, [to start a conversation].”

Upon finishing the script, Allen first reached out to the big LGBT-friendly theaters around the country. Then, while discussing the play with others, he realized that the play was a conversation starter. So, he contacted Pride and LGBTQ organizations.

“The moment I learned about Take Pride Bloomfield! I knew I wanted Hiding in Daylight to be part of [the program]. This way, I could be involved with the first official reading of the play, choose my cast, lead the talk-back, and hear the feedback. It felt right.” He adds, “I am so grateful to my awesome cast. Being in Bloomfield, I wanted to use actors that have a connection to that town. All four have been connected to 4th Wall Theatre at some point and Beth Baur is also the co-founder of New Jersey School of Dramatic Arts, in Bloomfield. She is joined by Ted Cancila, Bruce McCandless, and 4th Wall’s executive director and founding member Gwen Ricks-Spencer (who is producing the LGBT musical, Fun Home, in June).”

On May 19, at the premier reading of Hiding in Daylight as part of Take Pride Bloomfield! program there will be some limited staging, to give the audience a feel of what the play would look like as a full production. Above all, Allen wants to make sure that people in the audience “hear and take in the dialogue, and the message of the script,” he says. “I want people to stop and look at the present by viewing what it could be[come] in the future, and stop it [from happening] before it’s too late. If this play can be a catalyst for others to start that conversation, I would be thrilled.”

Hiding in Daylight examines a scenario that seems both implausible, and also all too real. Belli, the Director of the Bloomfield Public Library said, “Including [it] in our examination of the LGBTQ+ experience in America feels timely and prescient.” And just like Allen, Belli hopes that the Take Pride, Bloomfield! program, and the play, will be a conversation starter. “It is our hope that the connections and discussions that began with this project will continue, and that people will be inspired to celebrate, educate and advocate for LGBTQ+ [community] in the future.”

After the New Jersey debut reading of Hiding in Daylight, groups and organizations around the country, including Key West and Dallas, are interested in reading and discussing the play. Learn more about it and about Gregory Allen’s work by visiting him online at gregorygallen.com./

To find out more about Hiding in Daylight, visit asdmedia.co/hiding-in-daylight2.html/

Behind the scenes with actor, activist, and celebrity host Ron B

The Leathermen is a Mike Ruiz Project