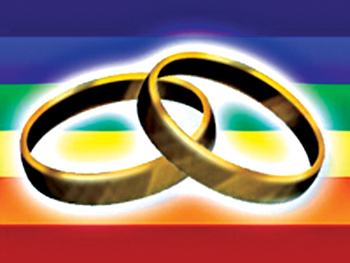 The United States Supreme Court refused to hear cases from Indiana, Oklahoma, Utah, Virginia and Wisconsin seeking to keep their bans on same-sex marriages in place. The court’s decision, a surprise to both sides in the battle for equality, will effectively allow marriages to proceed almost
immediately.

The refusal by the court to hear those cases could also clear the way for same-sex couples in Colorado, North Carolina, South Carolina, Kansas, West Virginia and Wyoming as those states had their initial prohibitions struck down by the same circuit appeals courts.

“The question of whether same-sex marriage bans are constitutional is a historic issue, under the
Constitution and for the Roberts Court,” said Thomas Goldstein, publisher of SCOTUSblog.com and a Washington attorney. “It’s hard to imagine a situation where judges are going to have more power to define the social and family relationships of the country.”

19 states- including the District of Columbia, New Jersey, New York and Pennsylvania- allow same-sex marriages. A Supreme Court decision on the constitutionality of same-sex marriages would level the playing field across all 50 states.

“But we are one country, with one Constitution, and the court’s delay in affirming the freedom to marry nationwide prolongs the patchwork of state- to- state discrimination and the harms and indignity that the denial of marriage still inflicts on too many couples in too many places.”

In the wake of the Supreme Court’s decision, Nevada and West Virginia withdrew their appeals for a stay with the high court which will allow same-sex unions in those states. A private group that had led the effort to defend Nevada’s voter-approved ban, suddenly withdrew its appeal for a stay. West Virginia’s Democratic Governor Earl Ray Tomblin announced that he would not challenge the federal court rulings on same-sex marriage.

“West Virginia will uphold the law according to these rulings, and I have directed state agencies
to take appropriate action to make that possible,” he said in a statement. “I encourage all West Virginians – regardless of their personal beliefs – to uphold our statewide tradition of treating one another with dignity and respect.”

While some states that were proceeding with issuing same-sex marriage licenses, others like South Carolina have put a hold on everything while the matter is being reviewed. In all, 35 states could have legalized same-sex marriage over the course of the next few weeks.