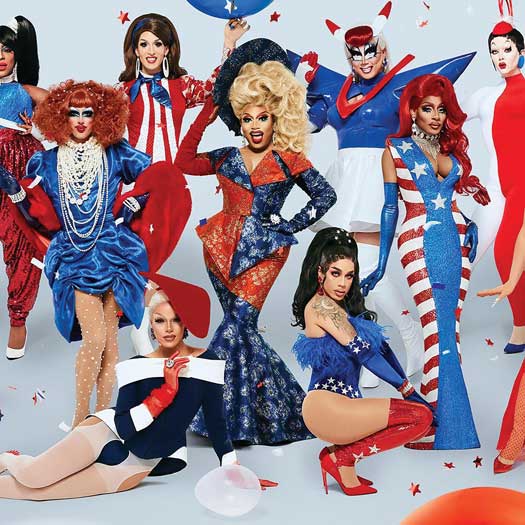 The drag queens are back together again, and they are live and on tour and actually singing. Now you can share in the excitement, at least virtually, on Saturday, January 16, when Dragapalooza premiers, streaming on mySongbird.com. Watch and hear Courtney Act, Derrick Barry, Rhea Litre, Trixie Mattel, Coco Montrese, and Sharon Needles.

No lip synching for these international celebrity drag queens as they sing and perform onstage in this compilation of clips shot at Dragapalooza performances around the United States, including Los Angeles (El Portal Theatre), Seattle (Egyptian Theatre), New Orleans (House of Blues), Milwaukee (PrideFest), and in New Jersey in Atlantic City at the Hard Rock Casino.

Dragapalooza began as a live show in 2017 at the El Portal Theatre in Los Angeles as an exciting twist from traditional drag shows. Equal parts rock concert, music theater, fashion show, and cabaret, this is not your traditional lip synching drag performance because these fan favorites sing live accompanied by a world-class live band led by Grammy-nominated producer Chris Cox.

Just what we need at the end of 2020, the unexpected year that was and is thankfully coming to an end, a live rocking concert full of drag queens singing, dancing, and performing like you’ve never seen or heard them before.

Even though COVID-19 delayed their planned Las Vegas residency, these fan favorites won’t let a pandemic stop them. Now you can invite them directly into your home via streaming television thanks to mySongbird, a sustainable company filling the void of premium musical entertainment on television by providing in-person and streamed concerts.

“With the success of the sold-out live shows and a delayed Las Vegas residency due to the current health crisis we knew that the film needed to be released now,” said Executive Producer Michael Benedetti and Producer Ann Potenza. “The film celebrates the art form of drag and is the perfect antidote to spread joy while we wait for the live events business to rebuild.”

And speaking of drag queens coming to life and spreading joy, listen to this interview with world-famous drag performer Derrick Barry talking about what it was like to perform in

Dragapalooza here in the latest Out In Jersey podcast.

If you like drag queens and live music, you’ll love Dragapalooza, and you’ll be pleasantly surprised by their talents actually singing their own songs and covering songs appropriate to their drag personas. Start streaming Dragapalooza on Saturday January 16 at mySongbird.com or Dragapalooza.com. Save $5 with the code DERRICK.