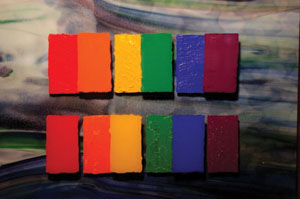 Openly gay marine and waitress Dayna Morales, who was stiffed out of her tip last week at a restaurant in Bridgewater because of her “lifestyle” has made headlines again by giving a portion of her donations to the Wounded Warrior project according to NJ.com.

“People have sent me tips from all over the world just to show support. I have had people from Germany to South Africa, Australia to the U.K., San Diego, everywhere,” she told CNN, adding that she received around $2,000. “It wasn’t for the money. I never planned on this. I just wanted to vent. The purpose was to inform people it wasn’t OK.”

“I plan, being [as I am] a veteran, to send a portion of it to the Wounded Warrior Fund,” she told WNBC TV in New York. “It’s great to see everybody’s support and I’m thankful for it, but it doesn’t excuse or change the fact that it actually did happen.”

Morales’ employer reportedly plans to match every donation. If you want to offer your support directly, donations to “Morales for the Wounded Warrior Project” can be delivered in person or mailed to Gallop Asian Bistro, 793 Route 202, Branchburg, NJ 08876.

A welcoming place for LGBT youth in South Jersey