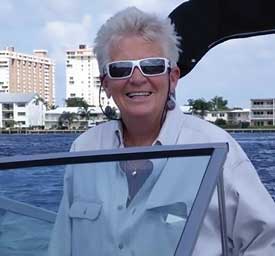 Starring and co-written by Kathy Halenda, it also features Jim Prosser as “the pianist” who serves not only as piano accompanist, but also as announcer and comic foil to Halenda’s Sophie Tucker. This night was a preview before the opening, and if what was on view was any indication of what theatre- goers will see during its run, then they are in for a treat. Kathy Halenda triumphs as Sophie Tucker.

Halenda is Sophie Tucker. She is a mix of Ethel Merman, Mae West, a soupcon of Gypsy Rose Lee, and every saucy dame you can think of, and Kathy Halenda traps us in her web. Bette Midler often quoted Sophie Tucker’s bawdy jokes years ago in her acts, so they might sound familiar.

The program was presented in two acts. The setting is an elaborate salon (a den of seduction, in fact) where we are privileged to hear songs and shockingly frank patter to flesh out the person behind the persona of Sophie Tucker. Accompanied by her pianist in tailcoat, Halenda wears a gown we would associate with Mae West, who apparently was cut from the same seductive cloth. With songs titled, “He’s Tall, Dark, and Handsome,” “A Good Man is Hard to Find,” “Living Alone and I Like It,” and many more (23 numbers in all are listed, encore included), we were also treated to audience participation. Telling us she had an eye for handsome men, Halenda/ Tucker picked men from the audience as fall- guys for her skits. One skit in particular, “Hula Lou,” had the star leave the stage to return wearing a coconut brassiere and grass hula skirt. To top this, the two men she invited onstage were also dressed in coconuts and grass, as they swayed and tapped their nuts to the music with wooden spoons.

Act two did feature melancholy songs, culminating in a teary- eyed “Yiddishe Momme,” which was then followed by upbeat, patriotic songs, bringing the review to a happy conclusion.

Additional cast (listed but unseen) were Melissa Joy Hart (Sophie Tucker understudy) and David Jenkins (Associate music and vocal director and Pianist understudy). In addition to Halenda, the other co-creators of the evening were listed as Richard Hopkins and Jack Fournier. Richard Hopkins directed. According to the program, this was “Developed and originally produced by Florida Studio Theatre, Sarasota, Florida, Richard Hopkins, Artistic Director.”

Bruce Price created the lovely salon on stage, and Marcella Beckwith created the memorable costumes -and that feathered fan!

The Independence Studio on 3’s 2013-2014 season will include five plays. Their next offering is “Driving Miss Daisy,” to be performed January 14 to February 2. For further information, visit their website: www.walnutstreettheatre.org/season/i-studio.php

Readers of Out in Jersey might be interested to know that this performance was a special preview which was partially booked by a gay men’s social group, “The Delaware Valley Gay Neighbors.” This was a free membership benefit which also included post- theatre snacks at the second floor party space at nearby Stella Rossa Ristorante, 929 Walnut Street. For more information on how to join DVGN, visit: www.dvgn.info/

Take an absurdly humorous look at “The Giant Void in My...