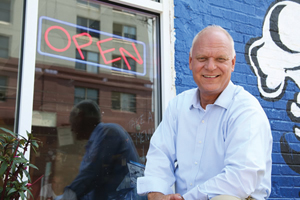 Think of Sherry Vine’s rise to the (figurative) top as a fairy tale. She begrudgingly waited on people as a server until realizing she could dress all pretty and make a lot of money. Next up was singing about penis, poop and boobs (hey, if the shoe fits), referencing those while spoofing pop icons in her outrageous YouTube takes on “Born This Way,” “Rolling in the Deep” and Madonna’s newest single, “Give Me All Your Luvin’.”

Then, finally, her happily-ever-after: She got a TV series, a zany half-hour, anything-goes variety show called She’s Living For This on the here! network.

We got Vine on the phone recently to chat about paying homage to variety show icons, her reason for doing drag and how she gets so much penis (take that, Cinderella).

The show is a modern twist on classic TV variety shows – because if there was one thing missing from The Carol Burnett Show, it was penis.

Sherry Vine: (Laughs) I agree! One of my favorite topics. Penis and boobs.

Where does your dirty mind come from?

SV: I don’t know! But I remember being in high school, and we would do musicals and I would literally sit there and write dirty lyrics to all the songs and then read them or sing them to people. I have no idea where that comes from.

SV: Well, they’re pretty silly, actually. And they have a good sense of humor and are a little on the dirty side. Some of my videos they love, and there are definitely some that cross the line for them. Anything to do with fist-fucking is really not for my parents. But the poo-poo ones, they love!

How do you conceptualize the sketches?

SV: I keep a little book that I’ve had forever, and I always write down ideas and then I might not look at it or think about it for 10 years. Sometimes other people come up with the ideas and I will write it down, but people – friends, people I work with, tweets – are always offering ideas. “You’re a Homo” came from a drag queen in Orlando who wanted a parody of “Alejandro.”

This variety show’s been a long time coming, right?

How does it feel to get it off the ground?

SV: It really is like a dream come true. I’ll be there in front of the cameras and I still can’t believe it’s happening. I feel like I’ve been doing Sherry Vine for 20 years and it’s all been building up to this.

What was Sherry Vine up to 10 years ago?

SV: Really the same, but YouTube clearly opened me up to a much bigger audience. I’ve been making a living performing as Sherry in larger cities for the past 15 years and it’s just been the past three years, since the invention of the YouTube, that it’s spread.

How did TV variety show icons, like Cher and Carol Burnett, inspire the show?

But they didn’t have penises on their shows. What inspired the full frontal?

SV: We don’t have the censorship. So, right away, we wanted to just introduce to people that this is going to be different than what they’re used to seeing. And we weren’t expecting all that penis! (Laughs)

I’ve only seen the first episode.

How do you find the penises for this show?

SV: Oh, honey, I fucking love Facebook because I can put something on Facebook – “Anyone wanna have a nude walk-on?” – and I’ll get 20 responses in an hour.

What else do you live for besides this show?

SV: Right now, that’s it. My focus is this right now because I want to give it everything I can possibly give. I want to make sure everything is right. Everything bigger and better than before.

Does that mean you’re putting a hold on video parodies?

SV: No. We had a little break in January and I took advantage of the time and whipped up some videos. We did one with this medley, which was just for fun, and the Pandora Boxx one was big because it involved a lot of people flying in from L.A. for the day to shoot the video. I’m working on a video parody right now; we just wrote it, and we’re recording it and then we’ll shoot the video hopefully in a couple of weeks – another one with Peppermint Gummybear. So yeah, there will be more of those coming.

What’s the trick to spoofing a song or video?

SV: I feel it out depending on how big the original song is. If it’s Lady Gaga, then I go all out and do a parody of the video, not just a parody of the song. Then you take her video and, luckily, Lady Gaga just gives you so much to play with. (Laughs) The “Telephone” one was probably my favorite in terms of what we did if you look at her video and then ours. Every little thing – “How do we make fun of her cigarette glasses?” – we picked apart. And then there are some where it’s me standing in front of a green screen and it’s just meant to be silly. Those are the ones that cost, like, a dollar. (Laughs)

Is there anywhere you won’t go?

Have you heard from any of the artists you’ve spoofed?

SV: Totally. Katy Perry liked the “Fire Crotch” video; she actually tweeted it and sent it out and thought it was funny. And I’ve gotten two messages from Lady Gaga. One for the “Born This Way” parody and the other one for a cover of “You and I.” She responded to both of those – tweeted them, responded to them on her website and wrote me a really sweet email.

Do you and her have a history?

SV: No. I met her – and I don’t know if she even remembers – before she was hugely famous in a teeny dive bar. She was walking from bar to bar performing “Just Dance” and I met her and hung out with her. But we weren’t friends, no.

When did you first realize you wanted to do drag?

SV: In theater school, I was always drawn to female parts. I would read “A Streetcar Named Desire” and think, “Oh, Blanche is the good part; I don’t want to be Stanley, I want to be Blanche.” I was just drawn to the female parts more than the male parts because they were just more interesting to me as an actor.
When I first started drag, the focus was not performing at bars or clubs or singing; the reason I first started doing drag was because I wanted to be the leading lady of a theater company I helped start. And then I was like, “I don’t want to wait tables anymore, so let’s see if I can make money in drag.”

Did you wait tables for a long time?

SV: It felt like a long time! I waited tables for six years. Long enough to hate it.

What’s the secret to your legs?

SV: (Laughs) It’s from wearing those heels. People would make fun of my legs growing up as a kid – telling me I have skinny chicken legs – but they work in heels!

Chris Azzopardi is the editor of Q Syndicate, the international LGBT wire service. Reach him via his website at www.chris-azzopardi.com.

Think of Sherry Vine’s rise to the (figurative) top as a fairy tale. She begrudgingly waited on people as a server until realizing she could dress all pretty and make a lot of money. Next up was singing about penis, poop and boobs (hey, if the shoe fits), referencing those while spoofing pop icons in her outrageous YouTube takes on “Born This Way,” “Rolling in the Deep” and Madonna’s newest single, “Give Me All Your Luvin’.”