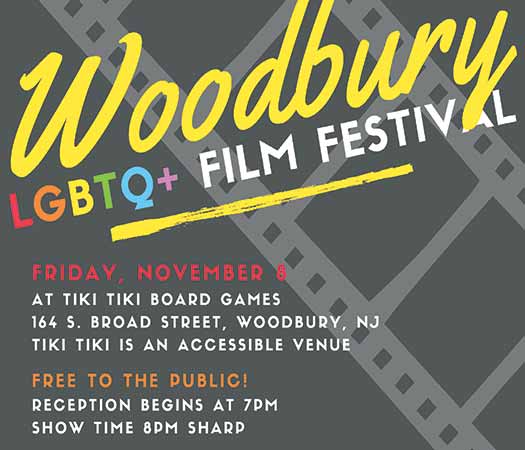 A number of international LGBTQ films curated by Krissy Mahan and Patricia Silva of Feminist Film Workshops will come to Woodbury, NJ. The series of films highlight the cultural diversity of the LGBTQ community. Woodbury Community Pride received an action grant from the New Jersey Council for the Humanities to bring the Second Annual LGBTQ Film Festival back to Woodbury this year. The film festival will be a collaborative event between WCP and FFW.

Tony Doran, President of WCP established the organization in April 2017 with the goal of creating a safe and welcoming environment for LGBTQ people and small businesses. “We are excited to bring the Film Festival back for another year,” said Doran. “We hope to address the need for greater access to LGBTQ culture, business, and community in typically underserved suburban towns so we can be who we are, where we are.”

Krissy Mahan and Patricia Silva from Feminist Film Workshops are filmmakers and curators whose work has been featured at numerous film festivals. Mahan is a South Jersey native; and Silva is a former Philadelphia resident. Together they produce film workshops and develop educational programs. Together they have screened their works at Anthology Film Archives, USA (2017, 2018); British Film Institute, England; Cervantes Institute, Brasil and India; and at Center of Contemporary Art Glasgow for SQIFF (2017, 2018). They have screened, and been panelists, at New York City Feminist Film Week (2017, 2018).

“We are thrilled to host to such a wonderful, heartfelt event for the second year., said Ryan Morrison. He owns Tiki Tiki Board Games at Polsky’s Corner where the events will be held. Morrison is also a recipient of a 2018 WCP Rainbow Award for his outstanding support.