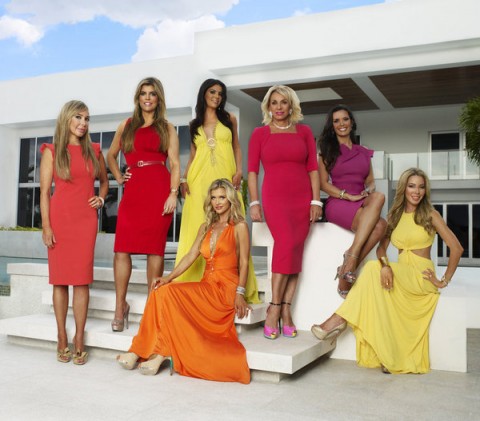 Right off the bat, let me clear something up: This season of “The Real Housewives Of Miami” is nothing like the first season (which incidentally was scheduled to be a different kind of Miami reality show and morphed into a part of the “Housewives” franchise). There have been casting changes with the Larsa Pippen and Christy Rice being removed from the cast (much more suited for “Basketball Wives”) and replaced with several new Housewives, including model and “Dancing With The Stars” alum Joanna Krupa (more on that later).

First up, the returning ladies: Lea Black (wife of Roy Black, lawyer of William Kennedy Smith) returns as the unofficial “Mayor Of Miami” and she’s as larger than life as always. She fills the Vicki Gunvalson (Orange County) or the Lisa Vanderpump (Beverly Hills) role, as the “elder diva” of the cast. Returning Housewives Marysol Patton (as gorgeous as ever) is also back with a big life change, and Adrianna De Moura (who secured her spot during an insane reunion appearance after Season 1). Season 1 Housewife Alexia Echevarria also returns, but this time as a “FOH” (Friend Of Housewives) as her son sustained severe injuries in a car accident, which took precedence during filming.

Joining the ladies are the aforementioned Krupa (who in the premiere looks to be a big part of this year’s drama). Lisa Hochstein is, as she calls herself, her plastic surgeon husband’s “best creation” (VERY Miami), while “dentist to the stars” Karent Sierra (a fellow Colombian) is dating a latin telenovela star, and Ana Quinvcoces is a self made lawyer in an unconventional marriage. Each of the new ladies are bringing something to the table that the previous cast members simply didn’t have; an exciting back story, previous relationships with the other wives (some including romantic entanglements) and most important of all, high drama!

Each franchise has their own fan favorite supporting characters as well. From Greg Bennett and Cousin Rosie on the “New Jersey” cast, to the dastardly Cedric on “Beverly Hills”, the supporting characters take on a life of their own as their storylines develop. In “Miami”, Mama Elsa (mother of Marysol Patton) definitely fills this role. From her plastic surgery (which seemed to be ignored on Season 1, but not so on Season 2) to her outrageous one-liners, keep on eye on Mama Elsa to bring the glamour this season (as well as some surprise drama)!

The producers behind this dramatically revamped season are the same producers behind Season 3 of “The Real Housewives Of New York City” which saw the crumbling of the Jill Zarin/Bethenny Frankel friendship and the very memorable “Scary Island” trip. While we may not have the New York cast on hand, the ladies of Miami certainly seem ready to take their place as valued parts of the franchise.