After changing TV in 1998, Sean Hayes is at it again

Where would our queer world be without Will & Grace? That’s where my head was just before Sean Hayes phoned, recalling my lonely teen years, when gay white men on TV alone — here’s to evolved representation! — was unprecedented and life-changing for people like 15-year-old, closeted me.

It’s not enough to say Hayes, 48, portrays Jack McFarland on the NBC sitcom, then, because some roles become legend, upstaging even the actor giving him life. Jack is one such character. And so a call from Hayes is like being a kid and spotting your fifth grade teacher at the grocery store: It doesn’t quite feel real, and yet Hayes is a real man with a real life and even a real husband, music producer Scott Icenogle. But to the late-’90s TV landscape, it was the actor’s half-fiction as Jack and his exploding-rainbow persona that cut through heteronormative programming with gay jokes even your grandma could get down with.

And then, there’s Karen. You obviously don’t need me to needlessly ramble on about Jack’s best socialite friend (played by Megan Mullally), who never met a martini she didn’t like. You know her. You love her. And together they truly make all of our friends out to be absolute fucking bores. The sitcom’s recent revival reinstated #friendshipgoals when the snarky pals, along with titular housemates Will (Eric McCormack) and Grace (Debra Messing), came swishing back to NBC in September 2017 for a ninth season after ending its initial 1998-2006 run.

Hayes isn’t Jack, exactly, but you could be fooled if he called you, too. His usually-unflashy voice sometimes picking up wind and taking on the kind of rapid-fire cadence his famous Cher-worshiping alter ego is known for. With season 10 premiering Oct. 4, and nine now available on DVD and digital, I caught up with Hayes to talk about those who’ve long criticized Jack for being “stereotypically” gay, the history of the legendary Karen-Jack slap fights, and who helped him be OK with being gay.

It’s hard to put into words exactly what it feels like to talk to the man who gave me such an iconic gay character when I needed it most.

When did you first know that Will & Grace had impacted the LGBT community the way it has?

SH: Just a couple of weeks ago! (Laughs). No, I’m joking. You know what’s so funny?  First of all, you have no idea how much that means to me. You saying how much I mean to you, it means equally as much to me, so thank you.

So when did I know I had an impact? I think when I was young and doing the show I was so wrapped up in myself, in acting, in getting the part: “Am I going to get fired? Am I gonna learn my lines?” I was just happy to have a job.

It’s such a fascinating thing to discuss, and I’m so glad you asked: I felt normal growing up, so when I got a job, playing a gay character on a television sitcom I just thought, “Oh, I just have to be me, kind of, a heightened version of myself.” I didn’t think it would have that much of an impact because of the bubble I grew up in. I surround myself with people who are accepting of me, so naively I was like, “The rest of the world must be OK with it.” I mean, I knew the stories out there. I grew up and knew it wasn’t accepted, but I just didn’t think on any big level it was any big deal, so that gave me the confidence to play him as outrageously as I could because, again, I’m surrounded by writers and actors — everbody else — who embrace this, so I felt loved, I felt supported and I felt confidence. So, I wasn’t going to work thinking about how this is going to affect anybody.

It was a wonderful byproduct later, and I was like, “Oh, ohh!” And once it started and all the press and blah blah blah, and we never got any backlash for being political in that sense, meaning how they politicized gay people, which is wrong. That’s another interview.

Over the years, people have criticized Jack for being “flamboyant.” How aware were you of that concern when the show returned for its revival season?

People wondered if Jack was too stereotypical for TV in 2018 and expressed some concern over what the straight community might think of us. 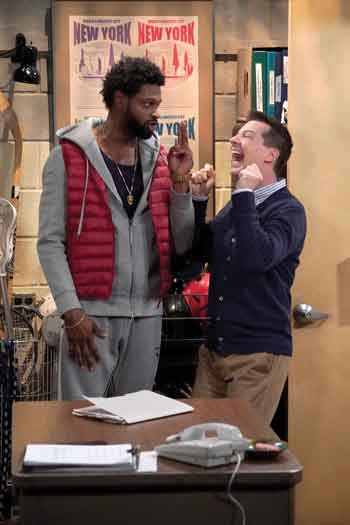 Similarly, Cam of Modern Family was criticized for being an over-the-top and exaggerated version of what a gay person is, and I’m like, what exactly is a gay person supposed to be in 1998 or 2018?

SH: Yeah, exactly. What are they supposed to be? And by the way, they are exaggerated, some of them. And so are straight people. Look at Jim Carrey, look at Robin Williams. There are lots of straight people who are exaggerated as well. I hate that argument — no, I’m glad you brought it up. I’m just saying I love talking about it, because it’s ridiculous.

As a kid coming to terms with being gay, who was your person?

SH: If you’re talking about a famous person, Andy Bell (of Erasure). Because I was in college and I was 17, 18, and I was shocked that somebody was out and proud, making a living in the arts or in pop culture by being who they are and not apologizing for it. I thought that was mind-blowing because “A Little Respect” was the No. 1 song on the radio and I was like, “Wait, the guy is gay and everybody is OK with that?” The truth is not a lot of people knew because we didn’t have the Internet, but I knew and all my gay friends knew. And I was like, “That’s amazing.” So that was inspiring to me, that you could be gay and make a living by singing, acting, whatever. But as far as actors go, Marty Short and Steve Martin were my inspirations in comedy, and Marty’s a good friend now and I love him. He is the funniest person, I think, in the business.

What has it been like to be a part of a show that has existed during two very different times, culturally and politically, for the LGBT community?

SH: First of all, I feel very fortunate and lucky to be part of the chorus of the movement. I may not be a single voice, but I’m enjoying being a part of the chorus. And I think that we’re lucky to have the voice and the representation for people to talk about it again, because I don’t think it should ever stop being talked about because everything is not OK. There are still gay kids being bullied. And look at that (gay) couple (who was assaulted) in Florida in the bathroom during Pride. It just doesn’t end. The hate doesn’t end overnight.

So we have to keep doing things, and again, my contribution may not be as an activist, because I just don’t feel comfortable doing that, it’s just not who I am. It’s not in my blood, it’s not in my DNA to stand at a podium and speak in sound bites about how we need to prevail over the government and the system. I leave that to people who are good at it; I’m not good at it. What I’m good at is being comfortable in my own skin and showing people that I have a husband and we make stupid Facebook videos and try to show people that we’re as normal as any other human, so I try to do my best at that. So I’m happy the show is back because there’s still tons of work to do. The power of comedy is so incredible; that’s why we broke so many boundaries the first time. And hopefully we can continue to do that.

Megan Mullally has said that you’re her “second husband,” after her real husband, Nick Offerman. How does your chemistry with Megan after all these years compare to the first time that you stepped onto set and shot the pilot?

SH: It’s so funny that she calls me her second husband because Nick and I were born on the exact same day, same year, about 30 miles apart from each other. Isn’t that hilarious? But it’s like working with your sister. There’s a shorthand that nobody else would understand, so it’s like, “I’m gonna do this,” and she’s like, “I’m gonna do that,” and then we just do it together and there it is. So, we now know how to cut through all the stuff that you need to in order to get to a comedic moment in a scene, and that’s what’s great about all this time that’s passed. I understand her, she understands me, we understand each other, so the chemistry has only gotten hotter.

Tell me the history of the slap fights between Karen and Jack.

SH: There’s an episode called “Coffee and Commitment” where Jack is trying to get off of coffee and Karen’s trying to quit alcohol, so that episode was the first time we slapped each other. It just, on paper, was “Karen slaps Jack, Jack slaps Karen,” but of course Jimmy Burrows, who is incredible at physical comedy and directing, of course, said, “Let’s make a dance out of this.” So, we rehearsed the rhythm of it, because I think that’s what makes you laugh — that’s what makes me laugh: the pauses and then the slapping again and then the pause and the slap-slap. It’s music, so you have to rehearse the beats and the rhythms in order to get that. (Laughs). It makes me laugh even thinking about it.

What do you envision for Jack’s future?

SH: Well, I don’t want him to change too much because our friends are our friends from high school because they never change, right? Maybe get married, but still remain Jack somehow, or find a long-term relationship. Or maybe — maybe!—there’s someone close in his own life that might be a suitable partner for life. Who knows.

Could you see them together?

SH: Could I see Will and Jack together? Maybe!

You’ve said you want to see him with Dwayne “The Rock” Johnson. Just so you know, I’m here for it.

SH: I think that would be a hilarious episode, and I hope Dwayne comes to his senses and comes to the Will & Grace stage to play and have a good time.

“The Lost City” of the D