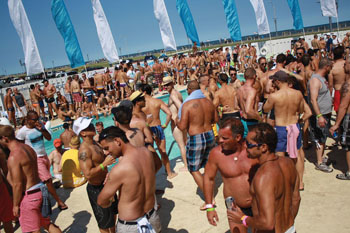 Sand Blast, the largest mid-Atlantic summer gay and lesbian beach party is moving to Atlantic City, NJ, says the event producer, Brad Hurtado. It will be held from Friday, July 18th to Sunday, July 20th. The weekend includes Friday’s Lost At Sea kickoff party at the Chelsea Host Hotel to welcome guests, and Saturday’s 7-hour Sand Blast Beach Party with DJ Joe Gauthreaux presiding over the dance floor alongside the ocean at the Bungalow Beach Bar.

The weekend-long event continues with a gay beach volleyball tournament and live stage performance on Saturday night at The Claridge Hotel’s theater followed by Deep Blue, an all-night dance party helmed by DJ Phil Romano from Barcelona, Spain. Then on Sunday, the main event is the Riptide Pool Party at the stunning

pool at Harrah’s with music by DJ Eddie Martinez. Later on Sunday evening, the closing party will be at Caesar’s spectacular Dusk Nightclub with music by New York City DJ Escape.

Sand Blast originated in 2002 when a small group of weekend homeowners in Asbury Park decided to create a summer beach weekend, so they could invite friends to the Jersey Shore. The goal was to increase the popularity of Asbury Park to LGBTs everywhere. Twelve years later, Sand Blast has grown into the largest mid-Atlantic summer LGBT beach party. The event’s impact on Asbury Park helped to create a thriving historic downtown and a boardwalk lined with shops, plus beaches packed with visitors. And of course a vibrant and involved LGBT community of over 600 households and thousands more LGBT visitors.

“The popularity of our weekend of events has caused us to outgrow Asbury Park, which has been our beloved home since 2002,” said Hurtado. “Atlantic City with its many hotels, attractions, and party venues was a natural choice, and this move allows us to continue our original mission to introduce our LGBT friends from cities along the east coast to the wonders of the Jersey Shore. Atlantic City’s airport opens the weekend event to an entirely new audience from as far away as New England to Florida.”

Atlantic City’s newly elected gay Mayor Don Guardian said, “We in Atlantic City are excited to host Sand Blast this year. This is a great opportunity for the LGBT community to enjoy our beautiful City, free beaches, and our amazing hotels.”