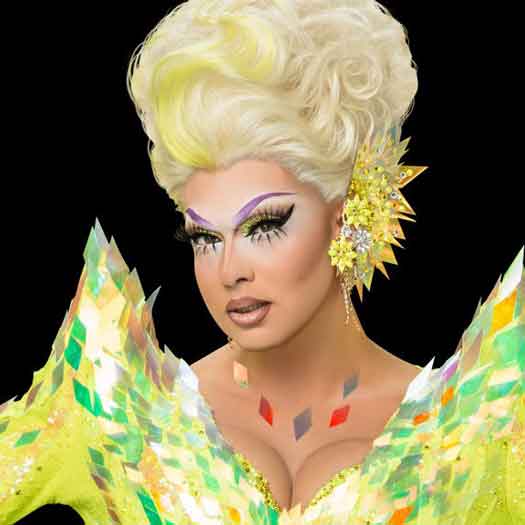 No one was eagerly anticipating her entrance into the RuPaul’s Drag Race workroom more than Alexis Michelle. As someone who has tried out, literally, for every single season of the show, this New York born, Broadway baby was ready for the spotlight. While she fell short as an illustrious member of this season’s Top Five, she is only just getting started.

Alexis sat down with me to chat about her sometimes controversial time on the show, what she has planned for her post Drag Race career, and why she thinks this year’s Pride events may be one of the most important ones yet.

Alexis Michelle: It’s hard actually. It’s so hard to make it that far and then have it slip between your fingers. It’s not been without some pain, but I have to remind myself that it’s truly an accomplishment to have made it this far to the top five. I also think it’s comforting to think of all of the other queens from Drag Race her-story that have been eliminated in the same fashion.

You were definitely frustrated during the final runway critiques; especially since you each had to tell RuPaul and the judging panel who you would send home out of the remaining contestants. Have you let go of any antagonistic feelings?

You came off as extremely polished, probably one of the more polished in quite some time. Do you think some of the other girls looked at you as almost too perfect?

AM: It’s hard for me to say how I was perceived. I remember in the first episode when we were in our Lady Gaga drag, and people had taken note of the fact, that I was glamorous, polished, and elegant, and that felt really good to me. It was great to get that from such fierce competitors.

Being a New York girl yourself, what was it like to work with another famous New Yorker, Lady Gaga on the first episode?

AM: Incredible! I have been telling people on my travels that getting the chance to work with her was such a highlight, and that she is as wonderful as you would expect her to be. Also, her coming backstage during Untucked to talk to each of us and give us notes was completely her idea. I will also never forget that Lady Gaga said that I was someone to watch!

Now that you have gotten to watch all of the episodes and see all of the Untucked episodes, how do you feel that you came across overall?

AM: I think that there were really wonderful moments where I came across as the mushy love bug that I know that I am. I also know that it’s a competition, and I so badly wanted to do my very best, and do well and come out on top. There were stressful moments where I acted, or was perceived to be a little intense. That’s a real thing though; the competition is real, and the stress is real as well.

You made it very clear that in your post Drag Race career, music is going to be a very prominent part of it. You had your own show at Feinstein’s/54 Below, and you collaborated on the single “C.L.A.T.” with your Season Nine New York Drag Race sisters, along with Mitch Ferrino….

New York is filled with some of the most vibrant and talented ladies, any of whom would be fantastic Drag Race stars.

AM: I could easily give you a list of girls who would be fantastic on the show, but I am only going to say one name: Dusty Ray Bottoms.

What do you want everyone to know about Alexis Michelle that perhaps they did not get to see from your time on the show?

AM: I want people to know that I am all about love and expressing yourself. If I can inspire people to express themselves fully, and be the most loving, and compassionate that they can be, that is what I want to take from Alexis Michelle.

Pride is taking on a very different tone this year, with it being such a politically polarizing time. What is going to be different for Alexis Michelle during this Pride month?

AM: You know, there has been some confusion over the years about these gatherings where we move through the streets. When they started, they were called marches. As the gay rights movement continued, they were then called festivals and parades. I can assure you: this year, we will definitely be back to marching.

Shangela is back and has Pride with a purpose