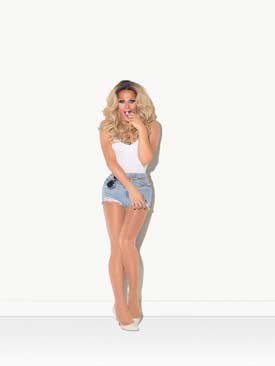 From the moment Puerto Rico’s own Kandy Ho stomped onto the runway on this season of “RuPaul’s Drag Race” it was a pretty safe bet that she would be bringing the heat. From her somewhat tense interactions with the other girls to her stunning runway presentations, Kandy made an indelible impression on the other girls and the viewers.

Kandy, you “lip synched for your life” several times, including during the premiere episode, and went home this past week. Was it disappointing to leave at this point?

Yeah, I wanted to go a little further. It got to the point where I felt that it would soon be though, because I had been in the bottom three times. I’m very happy with how things turned out, but I would have liked to have stayed a couple more weeks.

You’re  incredibly beautiful and have proven your various talents; how do you think you ended up “lip synching for your life” not just so early in the season, but three times?

You know, I really don’t know. I felt like I did a good job, I have no idea why I was at the bottom that many times.

If you had to pick out a moment about entire “Drag Race” experience that you absolutely loved, what really stands out in your mind?

Well challenge-wise, I would definitely have to say the “Glamazonian Airways” dance challenge, which was the second challenge of the season. It was really fun getting to learn the dance, and getting it all together. I think meeting all of the other girls, seeing where they come from and learning their different backgrounds, and then trying to apply their good points myself. Being a bigger and better drag queen is really what it’s about.

Looking back, what do you think are some moments you didn’t care for?

I really don’t think there is an moment that I didn’t care for, every moment was great, because I so appreciated being there. Even when things were hard, I still was able to say “ok, well at least you’re still here”.

From the beginning of the season, it looked like you were getting somewhat of a villain edit. You had a mild and tense interaction with Tempest DuJour on the main stage about asking her age when you first met, and on the last episode of “Untucked” it definitely got tense with you and some of the other ladies. Do you think the portrayal you received was fair and accurate?

It was a little too much sometimes, especially the issue with Tempest. The last “Untucked”, yeah, it was a little rough. When you’re with all of these different people, with all of these different personalities, at a certain point, you’re going to be like ok get away from me. You get a little tired of it. It’s not that I don’t like the other girls, I just need my space sometimes.

What challenge do you think you would have really excelled at if you had stuck around longer?

I really wish there would have been another dancing one; the “Glamazonian Airways” challenge was great. I would have loved to record our own song, like in Season 2 when Jessica Wild and the other ladies got to record their own tracks.

“Snatch Game” is one of the most anticipated challenges of the season. What was your character going to be?

I was going to be Martha Stewart. I did Britney Spears for my audition tape, and Tatiana (Season 2) did her for the “Snatch Game” on her season and she did really well. I definitely knew I needed to amp it up and do someone different for the show.

Of the ladies on the show, who do you still stay in touch with?

Kennedy (Davenport) definitely, Jaidyn (Diore Fierce) and Mrs. Kasha Davis, those are the ones I chat and text with the most.

Of the girls left, who do you think could take the crown to the end?

I’ve been rooting for Kennedy and Ginger (Minj). They are both very different drag queens and I think they definitely could go all the way to the end.

Post “Drag Race” what is next for Kandy Ho?

You know, my passion is to perform. Hopefully I get to keep traveling and meeting new people, showing my performing skills. It’s sad that some people let a forty five minute show let you think what you see is what you get of me. I like to meet lots of different people so they can meet the real me, and not just the television version of me. I just want to keep doing new things and try to keep my name in people’s mouths for a long, long time. This doesn’t happen to everyone and it won’t be forever, so I just want to live each day and enjoy each moment.

If you had to sum up the entire “RuPaul’s Drag Race” experience in one word, what would it be?

LGBQ people are six times more likely to be stopped by...