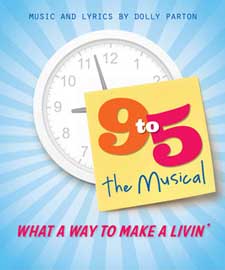 It’s Opening Night! The 2016 Season at the Ritz Theatre in Haddon Township kicked off with 9 to 5: The Musical based on the 1980 film of the same name starring LGBT ally Dolly Parton and her music. Yes, it’s been 36 years since the movie came out and the story line is still as appropriate and funny as ever.

Three unlikely friends; Violet “the ambitious”, Judy “the shy” and Doralee “the sexy” (played by Madeline Bender, Janine Merolla and Lauren Talvacchio respectively) are in the typing pool of “Consolidated” and, as expected, are treated with little respect or concern by their male co-workers. The “Boss”, Frankin Hart, Jr. played by John Baccaro is so despicable he gives “Snidely Whiplash” a run for his money and makes you look forward to the sadistic payback our heroines fantasize and then dish out!

With a very strong ensemble cast featuring Rhonda V. Fidelia as Roz, Hart’s completely smitten secretary, staging by David Mooney, and musical direction by Mario Marzullo, you will be transported to the 1970’s “big city” office building and completely entertained by this off beat comedy with superb music written by Dolly herself.

The historic Ritz Theatre first opened in 1927 and has retained much of the charm of it’s past. It is easy to get to from all major highways and also boasts ” The Gallery at the Ritz” and in-house art gallery, summer workshops, Children’s Theatre and community outreach. When you go to the Ritz you do more than just pay for a show, you help a community.

9 to 5: The Musical will play until Feb. 7th and the upcoming 2016 Season is sure to feature more fantastic shows including Dark of the Moon, The Great American Trailer Park Musical, The Addam’s Family and Tony Award winning comedy Vanya and Sonya and Marsha and Spike which is set in nearby Bucks County, PA.

Do yourself a favor and see this show. As Dolly says, 9 to 5 the Musical is perfect for anyone that’s ever wanted to string up their boss, which is almost all of us!

Hadestown tour is hell on wheels

Opera Philadelphia is back with Oedipus Rex + Lilacs

Nathalie Stutzmann: A maestro of the ages