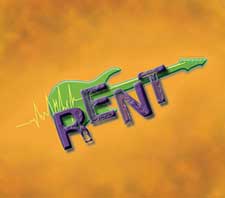 Rent wraps up the Ritz Theatre’s 2015 subscription season. And it is a wow. Again! This theater produces one amazing show after another.

Every aspect of this rock musical opera is done so well. The set, designed by W. Kris Clayton, is perfect. The singing, acting, dancing and choreography are spot-on. The cast is just great, but two stand-outs for me were Mimi, played by Krysten Cummings, and Angel, played by Cory Wade. Cory, you may recall, was featured in Out in Jersey’s last issue. As it turns out, Cory is not just another pretty face. He/she can sing! She/he can dance! And in drag, he/she is simply gorgeous.

Rent loosely based on Puccini’s opera La Boheme, was written and scored by Jonathan Larson. It was first produced in New York in 1996 and won numerous awards including a Pulitzer Prize for drama and a Tony Award for Best Musical. Tragically, Mr. Larson died the night before its Off-Broadway premier and did not live to see its resounding success.

Rent is the story of a group of social so-called misfits and outcasts, starving artists, many of whom are LGBT, who live hand-to-mouth in an abandoned building in New York. They band together to form their own kind of family to deal with the grim reality of being different and being creative. In a year of their life, we see them come together, break apart, love, hate, leave, and come back. We see drug addiction and AIDS. We see life and we see death. We even see a near-death experience! Pretty good for a two act stage musical. All of this set to toe-tappin’, get-up-and-dance rock music. By the way, the backup band on stage is pretty great, too.

Rent runs through November 22nd at the Ritz Theatre located at 915 White Horse Pike, Haddon Township. Tickets may be purchased at http://www.ritztheatreco.org by phone at 856.858.5230, or at the door.

Ritz Theatre kicks off the new season with “9 to 5”

“Lend me a Tenor” is Ritz Theatre’s latest offering

“God of Carnage” at the Ritz Theatre